Peachland fire that destroyed one home and expanded into the forest now deemed under control by BC Wildfire, evacuation alert lifted

Evacuation alerts for the areas surrounding the Peachland Maranatha Wildfire have been lifted as the fire is officially under control and officials have deemed the area safe for the public. One home was lost due to the fire.

Nine BC Wildfire Service fire crew members are on scene with one water tender. The fire remains at 0.9 hectares.

“There is no visible smoke and the status is under control,” Sam Ryan, fire information officer with the BC Wildfire Service said. Firefighters are still expected to continue working until dark and not need to attend the fire overnight.

The properties on Maranatha Drive that were tactically evacuated by the RCMP are now permitted to return to their homes. A detailed map is available showing the affected properties can be found at cordemergency.ca

The Evacuation Alert has been rescinded by the Central Okanagan Emergency Operations for all properties in the Maranatha area of the District of Peachland.

“While the Evacuation Alerts have been rescinded, conditions in the Central Okanagan continue to be hot and dry. Residents and visitors should be vigilant and aware that the fire hazard remains extreme. Central Okanagan emergency officials encourage everyone to be safe with any fires or smoking materials. In those areas that allow campfires, please keep them small and ensure that they are completely extinguished. Campfires and other outdoor wood-burning appliances are never permitted at any time in the City of Kelowna,” the release reads.

BC Wildfire Service fire crews continue to make strong progress against the fire in Peachland on Saturday, which maintains its classification as 'held', allowing for firefighting efforts to lessen as they monitor the area.

“I don’t suspect that we’ll be on-site overnight as it is a fairly small fire and they have made really good progress and it’s only five o’clock,” Madison Smith, fire information officer with the BC Wildfire Service said.

Expectations are for crews to continue working until dark and not need to attend the fire overnight.

Smith said there are now only 11 BCWS officers on site currently, and the helicopter has left the area.

“Which is a really good thing, because it means they're making great progress on it,” Smith added.

Several residents were evacuated from their homes, and many who were out at the time of the fire were not allowed entry after crews closed off Princeton Avenue.

No other homes were impacted, but the flames spread to a nearby forest before crews could get a handle of it. The fire reached a size of 0.9 hectares.

The fire was put out by an air tanker and helicopters, as well as 31 BCWS firefighters, not including the firefighters from the Peachland department.

One resident watched the blaze from his driveway.

“The flames got pretty high, I mean they definitely extended up about 30 feet It seemed like it from my perspective above the trees, and I just saw numerous fire trucks coming down, we had a couple water bombers come in dropping retardant, and then for the last hour helicopters have been dropping water,” he explained.

He also mentioned he heard the sound of an explosion go off shortly after the fire began, but said crews were quick in their response to the incident.

Cortni Berke lives near the site of the blaze, and she was out running errands before being told by police she wasn't allowed to access her home.

Her husband was still at the home, packing some personal belongings as well as their pets in case the flames spread. Berke added she is worried about the risk of fire season already.

“Absolutely. Absolutely I'm concerned. With it starting out so hot, this is going to be a heck of a year, I think it's going to be bad,” said Berke.

- With files from Jayden Wasney 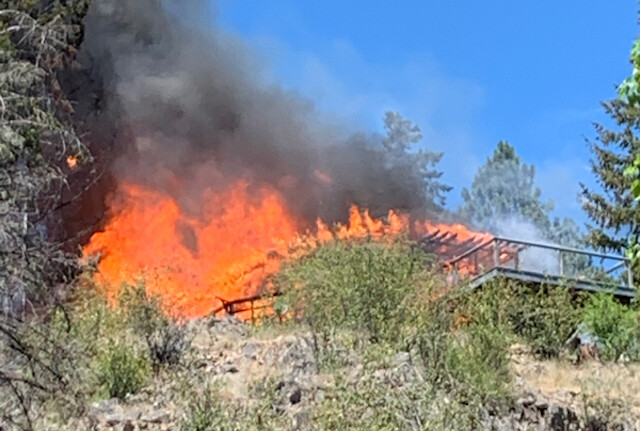 BC Wildfire Service has tackled the intense blaze at a Peachland home, which has now been classified as held.

“Sufficient suppression action has been taken and the fire is not likely to spread beyond the existing or pre-determined boundaries,” Madison Smith, fire information officer with the BC Wildfire Service said.

Smith explained that the fire reached 0.9 hectares before it was contained by BC wildfire services and the Peachland Fire Department. One air tanker and one helicopter were also assisting to contain the blaze.

Castanet reporter Jayden Wasney was on scene and said the house was lost to the fire, but did not reach other homes in the area. The fire did spread into the surrounding area and forest.

The fire now appears to be just smouldering, mostly left to smoke in the area as fire crews work on maintaining the fire lines.

The Emergency Operations Centre has been activated to support BC Wildfire Service, West Kelowna, Kelowna and Joe Rich fire crews.

All properties on Maranatha Drive were tactically evacuated by the RCMP and evacuated residents are taking shelter at the Peachland Community Centre under the care of ESS Volunteers.

An evacuation alert has been issued for the all properties in the following areas:

A detailed map is available showing affected properties at cordemergency.ca.

Residents on evacuation alerts are asked to be prepared to leave on short notice should conditions change and be prepared to be away from their homes for an extended period of time, make arrangements for pets and pack essential items such as medicines and important documents. Visit the be prepared page for more information.

Emergency response personnel are asking for the public to avoid the area so crew can effectively work and monitor the Central Okanagan emergency operations site for updates.

A number of residents near the fire above Peachland have been evacuated by the RCMP Saturday afternoon.

Matt Proulx lives about a block from the fire on Maranatha Drive, and he says he was told to leave his home by an RCMP officer just after 2 p.m. Proulx says the entire Pineridge Road neighbourhood was evacuated.

The BC Wildfire Service says just the one home has been impacted by the fire so far.

Madison Smith, fire information officer with the BC Wildfire Service, says the house fire on Maranatha Drive had spread to the surrounding forest and burned a two-hectare area.

The BC Wildfire Service is assisting the Peachland Fire Department with 31 firefighters, along with one air tanker and one helicopter hitting the fire from above.

Air tankers are dropping retardant on the fire above Peachland Saturday afternoon, in an attempt to stop the spread before it grows.

The blaze began as a house fire on Maranatha Drive, off Princeton Avenue, at about noon. The house quickly became engulfed in flames, and the fire spread to the surrounding forest.

It's not clear how large the fire has grown to at this time, but a Castanet reporter is en route to the scene.

Joan Niemeier, who lives nearby, posted to Facebook: "One house gone, planes now here but wind has come up. We are getting organized just in case."

The BC Wildfire Service has yet to respond to Castanet's inquiries about the fire.

The large plume of black smoke above Peachland Saturday afternoon is coming from a house fire on Princeton Avenue, but the fire may be spreading to the surrounding forest.

A house near Princeton Avenue, on Maranatha Drive, caught fire at about 12:15 p.m., and photos from the scene show it fully engulfed in flames.

The BC Wildfire Service is responding to the blaze with air support, and at least one air tanker and a bird dog observation plane can be seen flying near the fire.

Bruce and Judy Gowen live nearby, and they said fire crews arrived on scene at about 12:30 p.m. Bruce said there doesn't appear to be much wind at the scene of the fire, but another witness in the area tells Castanet it appears the fire has started to spread to the surrounding forest.

Castanet is waiting to hear from the BC Wildfire Service for more information.

A fire is burning above Peachland Saturday afternoon.

The fire is sending a large plume of dark smoke into the air in the Princeton Avenue area, in the hills behind Peachland.

The smoke first became noticeable at about 12:15 p.m., but a witness says it's "really going now."

It's unclear what's burning at this time. Castanet will have more information on the fire as it becomes available.