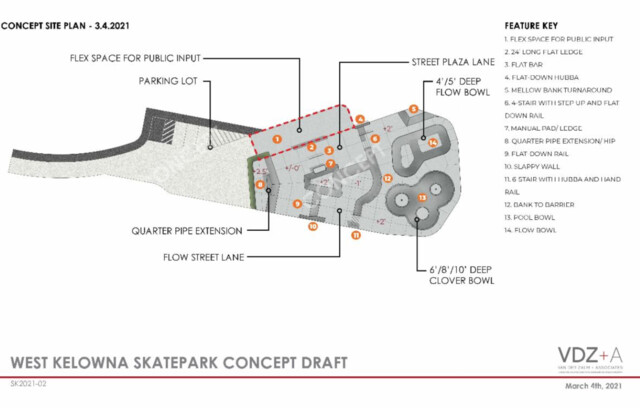 The City of West Kelowna is seeking feedback on a concept for a new skatepark at Memorial Park.

Residents can take part in a virtual open house running today through to April 18 to learn more about the project and provide their opinion.

The new concept will include a smaller bowl depth to accommodate those with with disabilities as well as increasing functionality and use from beginner, intermediate and advanced riders, by adding rails and ledges.

Improved entrances and seating areas are also planned alongside a flex space for skateboard overflow, recreation and cultural programming such as yoga, dancing in the park, street hockey and other services.

“Over the past few months, the city has worked closely with the skatepark community group and received early feedback about potential improvements they would like to see to enhance the existing design,” the municipality said in a news release.

The city says it is committed to keeping the existing park open to users until the new skatepark is open as expected this summer. The existing park is being removed to make way for the new city hall.