The Rose Valley Dam wildfire is still considered out of control, but it has reduced to three hectares in size.

Gagan Lidhran, fire information officer with the Kamloops Fire Centre tells Castanet "we will have one three-personnel crew stay overnight on that fire just to keep it monitored and make sure it doesn't spread."

Aircraft crews have stopped their efforts as they don't fly in the evenings.

"No structures are immediately threatened. The cause is still under investigation," says Lidhran.

Crews managed to make good progress despite strong winds. Smouldering hotspots remain but the fire is not expected to advance throughout the night.

"We'd like to thank BC Wildfire for their assistance and expertise in fighting this complex fire. The geography of the area as well as the gusty winds and hot weather made this a tough fight for all involved," says West Kelowna Fire Chief Jason Brolund.

"Teams from multiple agencies worked together in unified command to keep the fire small, prevent it from threatening homes and the drinking water supply for a large portion of our community. We thank the public for the multiple reports to 9-1-1 that helped us pinpoint the fire location and get there quickly."

The BC Wildfire Service says the Rose Valley Dam wildfire is now estimated to be 5 hectares in size and is currently classified as out of control.

Three initial attack crews along with a 20-person unit crew are responding with the help of aerial resources and the West Kelowna Fire Rescue.

The fire is considered an active surface fire with visible open flame.

No homes or structures are under threat at this time and the cause of the wildfire remains under investigation. The fire remains highly visible from Highway 97 and surrounding areas. 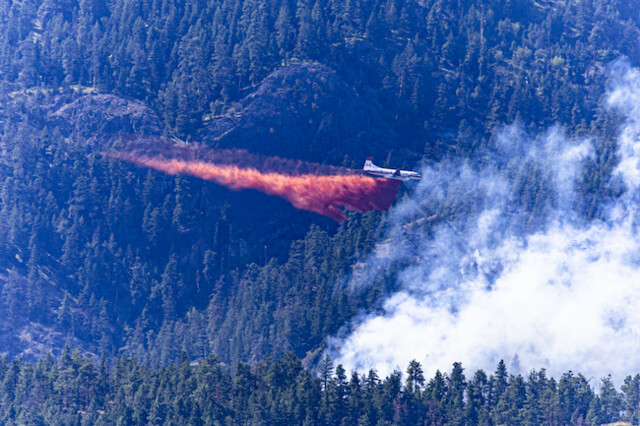 West Kelowna Fire Rescue says they responded to reports of smoke near the Rose Valley Reservoir at 2:15 p.m. on Sunday.

First responding firefighters spotted a growing wildfire burning on the west side of the reservoir.

Three engine crews along with twelve firefighters from West Kelowna hiked into the fire and began constructing a fireguard.

"Multiple helicopters and fixed-wing air tankers from BC Wildfire have arrived and continue to lay down fire retardant to “box-in” the fire as well as bucket water onto active burning areas in support of ground crews," West Kelowna Fire Rescue state in a news release.

The fire is expected to remain active well into the evening but crews are working to construct a fireguard, secure a water supply and contain the fire.

The fire is very visible and estimated to be less than five hectares in size.

It is burning uphill and to the east, away from populated areas. There are no evacuation orders at this time as the fire is not threatening any homes.

"We request that people stay out of the immediate area surrounding the reservoir, to enable firefighters and aircraft to do their jobs safely and effectively. Also, please stay away from helicopters who may be refilling on Okanagan Lake."

The BC Wildfire Service says they've received multiple calls for the wildfire taking place on the north end of the Rose Valley reservoir on Sunday.

"As of 2:51 p.m., I have been briefed by the incident commander and at this point in time we have a bird dog and three air tankers that are being directed towards that fire," says Gagan Lidhran, fire information officer with Kamloops Fire Centre.

"We got a medium helicopter en-route, as well as two initial attack crews."

She says six wildfires personnel are on the scene along with the West Kelowna Fire-Rescue Department.

Lidhran says the Kamloops Fire Centre wants to thank the public for sending in the calls at an urgent rate allowing crews to attack the wildfire quickly.

Residents are sharing their views of the forest fire on Westside Rd. in West Kelowna as the fire continously spreads.

One resident sharing a close-up of a helicopter gathering water from McKinley Landing for Bear Creek area.

Crews are currently battling the blaze, no word on how the fire ignited. 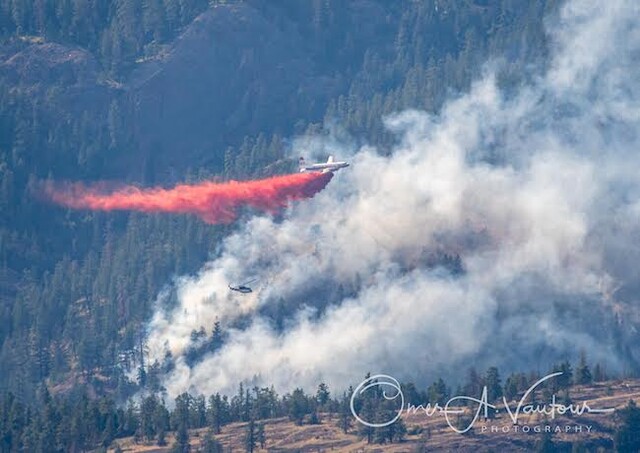 Castanet News is receiving multiple reports of a forest fire on the side of the mountain on Westside Rd. in West Kelowna.

Resident Nadine Vellacot says she noticed the fire around 2:15 p.m. at the very end of Rose Valley Road.

She says the fire has doubled in size since she noticed it first and has reached out to emergency services.

"I can see that it's growing really fast," says Vellacot.

Another resident says the fire is visible from Clement Ave. and Clifton Rd. area in Kelowna.

The fire looks to be between Rose Valley and Bear Creek along the side of the mountain.

Castanet has reached out to the West Kelowna Fire Department and Kamloops Fire Centre. 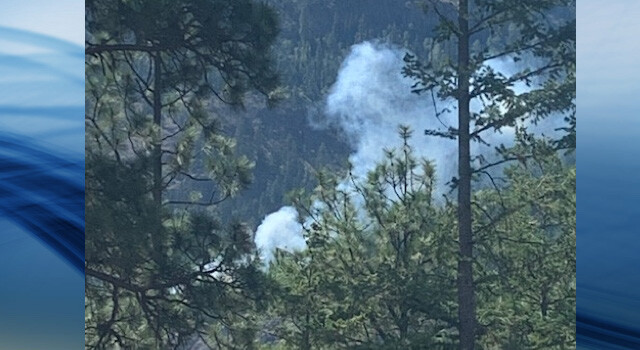