West Kelowna neighbourhood being over run by short-term rentals 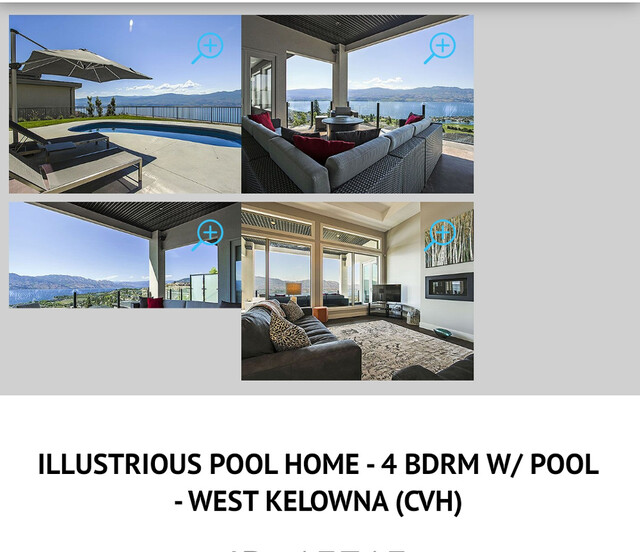 Photo: Okanagan Vacation Home Rentals
Screen shot of ad before it was removed.

Residents of a ritzy West Kelowna neighbourhood say they are are being driven out of their million dollar homes by short-term "party houses."

Sabine Zerwes says things began to go wrong in the Pinot Noir Drive neighbourhood above Mission Hill Winery about three years ago when a Vancouver man purchased a home and began renting it out as a weekly short-term rental.

She says the homeowner purchased the home next to her, put in a pool, and began renting it out last month.

"He just bought another home on Pinot Gris," says Zerwes.

"He put a big pool in there, and plans to start advertising that home next week.

"Three homes, four to five bedrooms each that are being rented out on a weekly basis. This is illegal - we all know it."

She says she complained to the Okanagan Vacation Home Rentals website stating the listing was illegal, and it has since been taken down.

Zerwes says people are constantly coming and going, and the noise is, at times, unbearable with six to eight adults and kids running around at all hours.

Some people, she says, have become fed up, and moved away.

"(It's a) Very lovely neighbourhood... we're all retirees. We spent a lot of money on our million dollar homes to live in a quiet, beautiful, quaint neighbourhood and, trust me, these party homes are not adding value to our street at all."

Unlike other municipalities in the Okanagan, short-term rentals contravene West Kelowna zoning bylaws, and therefore, are not allowed.

That has been a council decision to date, but council has asked that they have a discussion about that, and they will have that discussion in the coming months," director of development services Mark Koch told Castanet News.

"We recognize there are a number of short-term rentals within the community. Some have certainly caused community angst."

Despite that, at least 300 properties, from luxury homes to suites, single rooms, mobile homes and fifth wheels are listed on vacation rental sites such as AirBnb and Okanagan Vacation Home Rentals.

While Koch can't speak directly to specific enforcement files, he does acknowledge he is aware of neighbourhood concerns in the Mission Hill area.

However, there isn't much the city can do to shut down the illegal rentals.

"When we do receive complaints, we do follow up, and if a use is occurring contrary to zoning bylaws, the ability to ticket is certainly in place. Every offence could be repeatedly ticketed based on each occurrence," said Koch.

"Our goal is to ideally work with the individuals involved to bring about voluntary compliance. That is not always the case, but we certainly do strive to get there."

The only recourse for the city is a $500 ticket for each infraction.

Zerwes, meantime, is going not away.

In fact, she says, they're just getting started.

She says the neighbourhood is banding together, and expect to start a petition later this week to try and get some action taken.