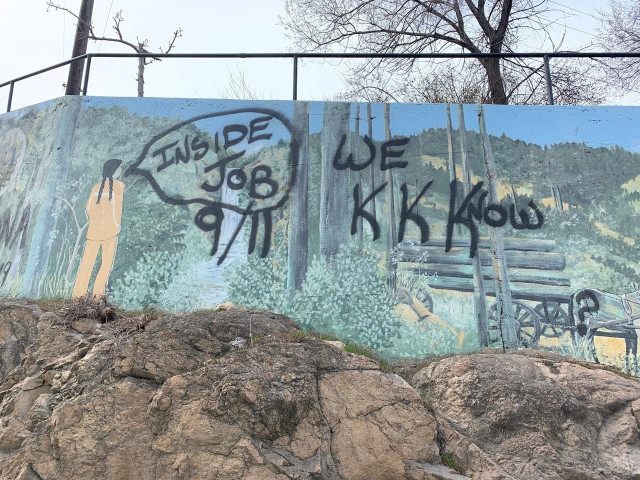 A frustrated Mayor of Peachland took to Facebook Wednesday to appeal for clues after the district’s retaining wall at the south end of town was vandalized.

“This is extremely frustrating,” Cindy Fortin said in a post to the Peachland Neighbours Facebook Group. “To be blunt, only someone very selfish would deface the mural.”

“Not to mention at a time when the public are doing their best to deal with the COVID-19 health crisis and trying to stay positive,” she continued.

Working off the vandals’ tags, Fortin asked if the public knew anyone with overt 911 conspiracy theories or has an interest in Milli Vanilli.

“While we normally associate graffiti with youth, this could very well be a well-cooked adult. Think of everyone you know, or any social media messages you've heard that are similar to this. Particularly someone who spouts hate messages and distrust,” Fortin said.

“This could also be someone who is enjoying the attention, so may be talking about it. Maybe someone who even feels this town deserves it, or thinks it's funny.”

“Anyone buy black spray paint recently? Smell like spray paint, or have it on their clothes?” she asked.

The mayor urged the public to not approach or accuse anyone they suspect, but rather called CrimeStoppers at 1-800-222-TIPS (8477).

Fortin said local governments are restricted as to where they can place surveillance camera, “but we are looking into this and other solutions.”