A successful planned ignition has combined two wildfires and will now be referred to as the Mount Eneas wildfire.

The estimated size of the out of control wildfire is 1,516 hectares in size.

Munroe Lake and Mount Eneas were combined to one fire and was done “to remove the fuel on the steeper slopes,” said BC Wildfire Service.

Ground crews, heavy equipment and air support worked on the fire with 112 firefighters.

North Beach Road and Callan Road remain on an evacuation alert at this time.

A technically challenging task was successfully completed by the BC Wildfire Service on Sunday.

Helicopters used a plastic spherical dispenser to drop ping-pong sized balls that burst into flames on impact to connect the Mount Eneas and Munro Lake wildfires together.

Incident commander for the Okanagan Complex Glen Burgess said the task went as well as they planned.

Burgess said the Mount. Eneas fire is burning out of control, but they don't expect any growth.

A dramatic and enormous plume of smoke has filled the sky in Peachland after BC Wildfire Service has attempted to join two fires into one.

Numerous helictopers could be seen circling the area during a planned ignite over the Mount Eneas and Munro Lake wildfire.

BC Wildfire Service dropped ping-pong size balls filled with chemicals that ignite on contact out of helicopters to bridge the two fires.

BC Wildfire Service said they plan to fight fire with fire today in Peachland.

Fire Information Officer Noelle Kekula said "ping-pong" size balls filled with chemicals will be dropped from a helicopter and ignite on impact.

This will likely occur around noon today, but will depend on numerous factors.

The area between the two fires is about 150 hectares and merging the two would make battling the fires more efficient and safer for firefighters, she said.

The Mount Eneas wildfire is currently burning at about 1,500 hectares while the Munro Lake fire is burning at 60 hectares.

Merging the two wildfires will bring the blaze up to more than 1,500 hectares.

"A test burn will determine if the operation will go ahead. Increased smoke may be visible," she said.

It is expected to be a low to moderate intensity burn.

A helicopter will be seen this morning dropping fire between the two blazes. Retardant was also seen being dropped on the northwest side.

The District of Peachland remains under a state of local emergency while the Mount Eneas and Munro Lake wildfires continue to burn.

Peachland Mayor Cindy Fortin speaks about the Mount Eneas fire that burns between Peachland and Summerland.

Castanet reporter Alanna Kelly is on scene in Peachland near the Mount Eneas wildfire that continues to burn at an estimated 1,374 hectares.

Kelly has an interview lined up with Peachland Mayor Cindy Fortin who will provide more information on the current state of the District.

The fire is believed to have grown slightly overnight but has apparently stayed within its boundaries, according to the BC Wildfire Service. 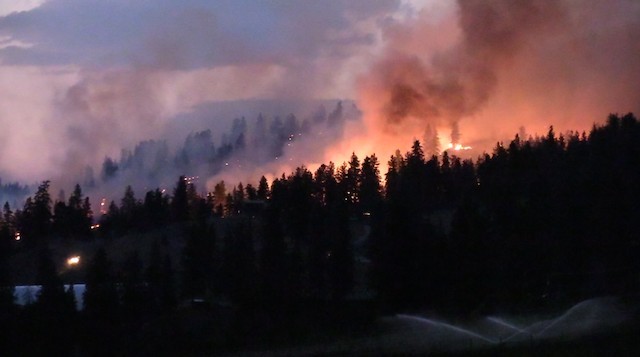