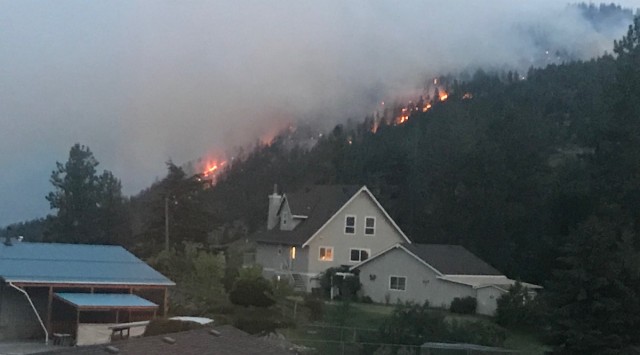 Peachland resident Heather Schramm tells Castanet the two fires "have not combined themselves yet," and they remain separate Thursday night.

Since the evacuations for those three homes on Log Chute Road, the Central Okanagan Emergency Operations Centre has issued an evacuation alert for 569 properties, south of Princeton Avenue, east to Highway 97.

The alert impacts about 1,490 residents.

While the BC Wildfire Service said earlier this evening the wildfire seen burning above Peachland Thursday night was the Peachland Creek Wildfire, it appears it's actually the gigantic Mount Eneas wildfire.

Late Thursday night, the Central Okanagan Emergency Operations Centre issued an evacuation order for three homes on Log Chute Road, just west of Antlers Beach, due to the encroaching Mount Eneas fire. The same fire has forced the evacuation of homes in the Garnet Valley area, more than 10 kilometres to the south – a testament to the fire's size.

Residents off Princeton Avenue, just north of the three evacuated homes, had expressed concern that they weren't under an evacuation alert yet. An evacuation alert is in place for the Antlers Beach and Hardy Falls areas.

A once-small fire west of Peachland that was sparked during the lightning storm Tuesday appears to have grown substantially, concerning many Peachland residents as night falls.

Fire Information Officer Noelle Kekula says residents are seeing the Peachland Creek Wildfire. Those in the area say the blaze is very visible from Princeton Avenue Thursday evening, and it appears to be moving closer to homes.

Alison Polacco, a resident near Vernon Avenue, says a fire is burning just above Hardy Falls, which may actually be the Munro Lake fire, just south of Peachland.

Antony Edwards, on Pineridge Road, sent in a picture of large flames right up the hill from several homes.

Daylon Chmelyk says the wind is “insane” in the area and he's been watching trees candle.

Kekula, with the BC Wildfire Service, says they've been working on the Peachland Creek wildfire throughout the day, but Chmelyk says he hasn't seen any fire crews in the area this evening.

“We're very well aware of this fire, we were actioning it all day,” Kekula said, but she was unsure if crews were fighting the blaze through the evening.

“We were working it pretty hard today,” she said.

“The winds picked up this afternoon, and it just reactivated it, it got it going a bit more, and at nighttime, the fires are so much more visible too.”

Neither the Peachland Creek or Munro Lake wildfires are listed as fires of note on the BC Wildfire Service website.

When asked about the possibility of fire impacting buildings this evening, Kekula said “there's always that concern,” but said they have had crews working on it. There are no evacuation alerts or orders in the area at this time. 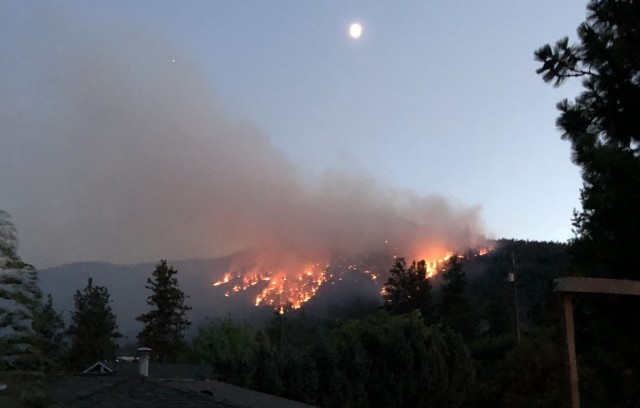