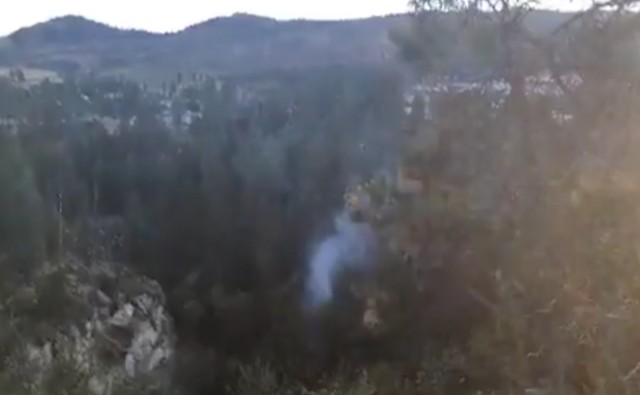 The 20 by 20-foot brush fire in Powers Creek is in the mop up stages but it is most likely human caused says, assistant fire chief Darren Lee of West Kelowna Fire Rescue.

"When they were looking around for the smoke they realized it's a little more than just a barbecue," Lee said. "They upgraded to a first alarm wild land fire and then requested a second alarm and got a request into the BC Wildfire Service."

"We want to get the wildfire here really fast if we have something going on."

The brush fire on the north side of Powers Creek was tough to access because it was at the bottom of a steep canyon.

"When they got to the bottom there was a 20 by 20 fire smouldering in the ground, which is what we call rank one," Lee said.

The cause of the blaze is still under investigation.

The small brush fire in the Powers Creek area of West Kelowna was first spotted by neighbours.

Municipal fire crews appear to have the blaze under control, which is a few metres square in size.

It is in Powers Creek Canyon, near several residential areas and Off The Grid Winery.

Firefighters made their way into the area from two sides, off Glencoe Road and from the opposite side in Glenrosa.

Castanet is on the scene of a small brush fire that has broken out in West Kelowna.

The fire is in the Powers Creek area, near Glencoe Road and Windt Road.

The fire broke out about 7 p.m. in steep terrain.

Fire crews are on scene, and helicopters are circling the area.