Premier Christy Clark defended the apparent secrecy of those in attendance at a $5,000 per plate dinner at Mission Hill Winery Thursday night, at a West Kelowna Board of Trade breakfast Friday morning.

Attendees at Thursday's dinner met at an undisclosed location, and were shuttled into the winery in vans with tinted windows.

In defence, Clark pointed to her party's recent move to disclose political donations much quicker than legally mandated.

“You will see in a number of weeks exactly who was there and who donated, that's the point of the real time reporting,” Clark said following the Board of Trade breakfast.

“The thing is, this is the way political fundraising has always been done in Canada, we've always raised money in the private sector.”

Clark refused to disclose who attended the dinner.

"They're paying that because they know they're going to get something special out of it,” said Dayleen Van Ryswyk. “It is a fact of our democracy now – it's for sale."

Clark said it's important for the public to know that “when someone donates to a political party, it isn't linked to a decision that government made.”

During the question and answer period at the breakfast, Clark discussed growing the tech sector in the Okanagan, promoting American tourism in the Okanagan, interprovincial wine trade, securing a softwood lumber deal with the U.S. and working with the City of West Kelowna to improve water quality.

Areas in West Kelowna remained on a water quality advisory for three months this past summer.

Premier Christy Clark was greeted this morning by a small number of protesters at a breakfast event in West Kelowna.

Dayleen Van Ryswyk, who is a small business owner, said she also showed up outside Mission Hill for Thursday's $5,000-a-plate dinner.

She says people arrived for the fundraiser at Mission Hill winery in Mercedes vans with tinted windows.

Friday's breakfast was a $28-a-plate event.

"Today I'm wondering if the business owners are going to get the same cash for access to Christy as the other people," she said. "Or do you just get certain access based on what you pay?"

A leaked email showed 20 people were invited to the "pay for access" event.

"They're paying that because they know they're going to get something special out of it. It is a fact of our democracy now – it's for sale."

Castanet has a reporter at the event and we'll provide more details as they become available. 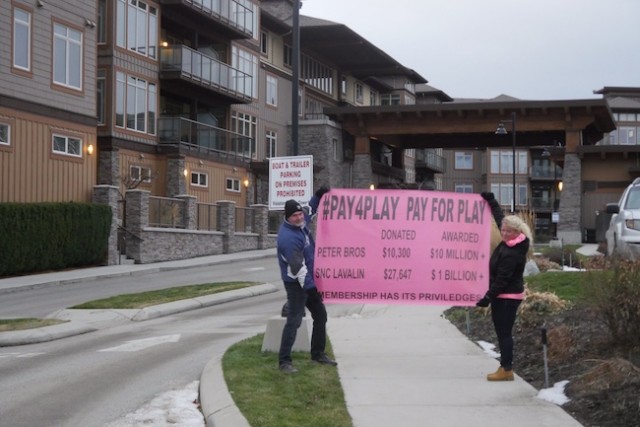