At this point, no dwellings have been lost to the fire although some outbuildings like sheds may be damaged.

Structural fire crews from West Kelowna, Peachland, Wilson’s Landing and firefighters from the BC Wildfire Service have spent the overnight hours putting out hotspots along the perimeter of the fire.

As of 3 a.m., approximately 60 people registered with the Emergency Support reception centre located at the Lions Hall, 2466 Main Street in West Kelowna.

The centre will reopen at 9 am. this morning to assist those forced from their homes by the wildfire.

Another 14 properties in the Pine Point subdivision off Westside Road, north of Traders Cove remain on Evacuation Alert.

Those residents should be prepared to leave on short notice should conditions change.

Boaters on Okanagan Lake are asked to stay away from the fire area in and around Bear Creek as air support may be used on this fire.

The Canadian Disaster Animal Response Team (CDART) is the Emergency Support for Bear Creek evacuees' animals. They are set up at the Reception Centre at 2466 Main Street in West Kelowna.

Evacuees can register with them to maintain their animals and livestock. They are also equipped to take in small animals.

Rose Valley Veterinary Hospital in West Kelowna has also volunteered their space for evacuees' animals. Dr. Oz, at the hospital, asks evacuees to call him at 250-769-9109 if they need a place for their pets.

Firefighters from West Kelowna, Peachland, Wilson’s Landing, North Westside Fire Rescue as well as the BC Wildfire Service remained on scene at the Bear Creek wildfire overnight, monitoring and patrolling the blaze.

So far, about 60 people have registered with the emergency support reception centre located at Westbank Lions Hall. The centre closed for the night at 3 a.m. and is expected to reopen at 9 a.m.

Approximately 156 properties are affected by that order.

Another 14 properties in the Pine Point subdivision off Westside Road, north of Traders Cove, remain on evacuation alert. Residents there should be prepared to leave on short notice should conditions change.

The next update from the Emergency Operation Centre is expected at 7 a.m.

All people evacuated south from Bear Creek Road are being asked to report to the Emergency Support Services Centre at 2466 Main Street, according to the Central Okanagan Emergency Services.

The centre is expected to be operational by 12:30 a.m.

More areas are being evacuated as the fire continues to burn, according to Central Okanagan Emergency Services.

People are requested to stay away from the immediate area as RCMP is doing traffic control.

The Emergency Operation Centre has been activated to support crews in the field responding to this incident.

Castanet will continue to update as details come in.

The fire appears to have grown quickly, as Traders Cove is added to the evacuation.

BC Wildfire Service is sending a total of nine firefighters to aid the West Kelowna Fire Department in battling the fire.

They are unable to use planes during dark, so ground crews are working without air support to fight the blaze.

Mike Batchelor, who can see the fire from Kelowna, said the fire appears to have grown threefold in half an hour's time.

Shane Hunter said he was camping at Bear Creek, when the weather took a turn for the worse.

He said he and his family went into their camper, and soon after, tree branches and other debris started to fall on its roof.

"And then we heard a big, loud bang," he said. "We could smell something, and then about two minutes later, we heard fire trucks."

When he looked outside, he saw the campground was in a panic.

"Everybody was just panicking, like leaving the campground in a hurry," he said. "There were fire trucks there, people were like, 'Evacuate, evacuate, get out,' and we just hightailed it out of there."

Hunter said he had to leave everything at the campground, as everyone was being ushered out of the grounds.

He added that there was a heavy presence from emergency crews blocking the highway.

"And there's a whole orange hue right in that area."

He said the fire appeared to be coming from just over the hills.

Hunter lives in West Kelowna, so he's used to fires, but he said there was some panic in the campground.

"There were people there in tents, and ... with little kids," he said.

A fire has broken out near the Bear Creek Campground near West Kelowna.

The West Kelowna Fire Department is apparently on the scene, with the BC Wildfire Service sending three people to assist.

People are reportedly being evacuated from the campground with little notice.

Drive BC reports that Westside Road is closed in both directions at Fintry.

The fire appears to be growing as wind whips through the area, but a light rain has also begun to fall in the area.

Little is known at this time, but Castanet will update as more details become available. 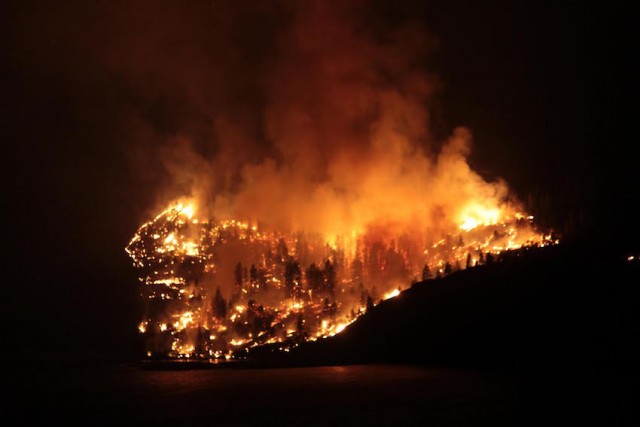