Be prepared to flee 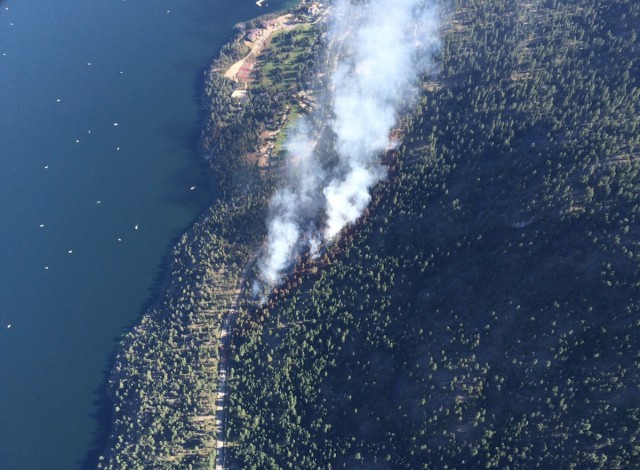 Central Okanagan Emergency Services has issued a warning to remind people that the evacuation warning is still in effect.

The blaze remains at 2.8 hectares, but authorities are reminding people to be wary, as conditions could change.

Overnight, firefighters and equipment from several agencies will remain on site to monitor the fire, conduct patrols and deal with any hot spots.

Structural firefighters from Wilson’s Landing and North Westside paid-on-call departments are being supported by those from West Kelowna Fire Rescue and approximately 20 firefighters from the BC Wildfire Service.

A portion of Westside Road will also continue to be closed throughout the night.

The BC Wildfire Service said the skimmer planes will be wrapping up their work shortly.

Those planes continued their operations after the air tankers, which use chemical retardants, discontinued their work on the fire earlier in the evening.

BC Wildfire Service said RCMP is continuing to do traffic control work in the area.

The wildfire is estimated to be about 2.8 hectares at this point, but the BC Wildfire Service says they are holding the fire from growing.

BC Wildfire Service says the fire has been reduced to a smouldering ground fire, and that firefighters are making "really great progress."

The Wildfire Service said air tankers have completed their operations using chemical retardant on the flames, but that skimmer aircraft are still at work, picking up water from the lake to dump on the fire.

A unit crew of 20 firefighters from the BC Wildfire Service will continue to work throughout the night to break the fire down.

Fire crews appear to be getting the blaze under control as the evening draws on.

The BC Wildfire Management Branch has sent 14 firefighters and nine aircraft to assist the Wilson's landing Volunteer Fire Department.

Although the fire is within regional district boundaries, the province have come to assist at the request of the Wilson's Landing department.

Ground crews from the North Westside and West Kelowna fire departments are also on the scene.

Fire information officer Melissa Klassen says the fire has grown slightly to two hectares. At the present time, it is a Rank 2, meaning smouldering ground fire with some open flame. There are some Rank 3 pockets.

Aircraft have been able to drop retardant around two sides of the blaze.

Klassen reminds boaters to stay away from the area, as skimmers are using that area to reload.

She said temperatures in the low 30s and reports of wind are aiding in fire activity.

An evacuation alert has been issued for areas around the Cinnabar Creek Wildfire.

The regional district has also activated its Emergency Operations Centre to support response to the fire.

People are requested to stay away from the immediate area and RCMP is doing traffic control.

The fire broke out about 3 p.m. this afternoon and, at last report, had grown to 1.5 hectares in size.

Crews from West Kelowna, Wilson's landing and North Westside fire departments are on scene with air support from the province's Wildfire Management Branch.

A fire burning in the Cinnabar Creek area north of Lake Okanagan Resort has grown to 1.5 hectares in size.

Officials with BC Wildfire Management in Kamloops say the fire has been displaying Rank 2 and Rank 3 behaviour, which is open flame and some candling of trees.

Ground crews from West Kelowna, Wilson's Landing and North Westside fire departments are on the scene.

An air attack has now begun on a fire near Westside Road.

Witnesses are reporting that wind is beginning to whip up flames.

Firefighters from the provincial Wildfire Management Branch have been called out to assist ground crews in what is being referred to as the Cinnabar Creek Wildfire.

The fire is burning north of Okanagan Lake Resort.

Fire crews from Wilson's Landing and North Westside are already on scene.

Provincial fire information officer Max Birkner said the fire is burning within local boundaries. They were called in at the request of the Wilson's Landing Volunteer Fire Department.

The fire is in the same area as a wildfire a year ago, which forced several evacuations.

More details when they become available.

Fire crews are responding to a report of a third brush fire in the Central Okanagan today.

This one was reported about 3 p.m. in an area north of Lake Okanagan Resort.

The previous two fires broke out in Lake Country.

Both were quickly extinguished.

More details on the Westside Road fire when they become available. 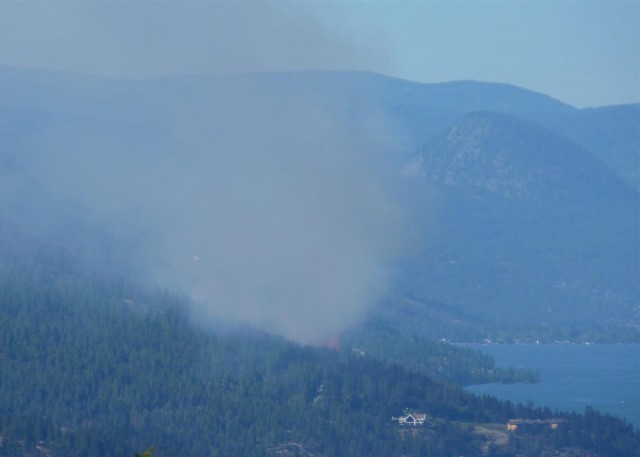