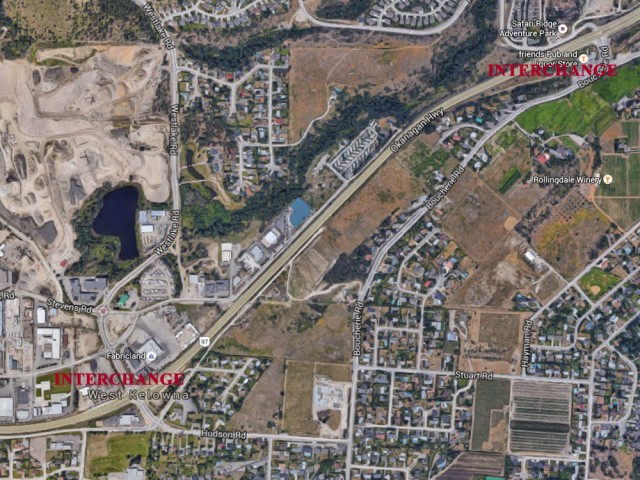 The provincial government is giving residents of the Central Okanagan a chance to look over plans for more interchanges on the Westside.

The Ministry of Transportation and Infrastructure is proposing a series of interchanges along Highway 97 at Boucherie and Westlake roads.

These would coincide with the interchange at Westside Road, underpass at Sneena Road and a second underpass between Westside and Campbell roads.

The interchanges will be on display at a series of open houses scheduled for next Wednesday and Thursday.

West Kelowna Mayor Doug Findlater has already seen the plans and doesn't really like them.

Findlater said a bunch of intersections up and down the highway is not the vision of a community he wants to see.

"The vision is not to have a bunch of interchanges and, there will be more.

"If you put those two in, then you probably need one at Bartley, then one at Daimler and Gellatly and so on. That's all you would be in the long term."

Regardless of how the mayor, or the public feels, it is believed an interchange at Boucherie Road is a foregone conclusion.

At the opening of the Sneena Road overpass 15 months ago, Westbank First Nation Chief Robert Louie said the interchange and underpass at Boucherie Road was negotiated with the province several years ago.

"I don't believe the province has made a final determination yet (in terms of timing). Yes, there are discussions happening and I am hopeful sooner than later, but time will tell. That will be up to the province," Louie said at the time.

"I believe all of the accesses need work -- some more than others. Hudson Road is certainly a congested area and I know that it is a topic the province is well involved with. The District of West Kelowna is involved with that as well."

Findlater said his council believes, if the province has transportation money to spend in the region, it should look at a road adjacent to the highway which could hook up with a proposed Peachland bypass and a second crossing of Okanagan Lake.

Next week's open houses are scheduled for: