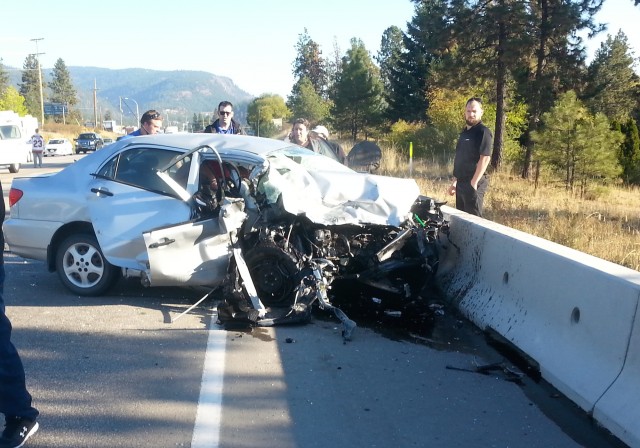 A two-vehicle, head-on collision sent a woman to hospital with life-threatening injuries this morning.

Just after 9 a.m., a silver Toyota Corolla was travelling south on Highway 97 when the 76-year-old driver slumped over the wheel and the vehicle drifted into the oncoming lanes.

A 32-year-old female driving a blue Jeep Liberty was unable to avoid the car, and the collision spun both vehicles almost 180 degrees.

The highway was closed for nearly two hours, as police investigated. Traffic in both directions was rerouted via Old Okanagan Highway.

Both drivers, local residents, were transported to Kelowna General Hospital for treatment. The driver of the Jeep was released without injury, however, the driver of the Toyota suffered serious, potentially life-threatening injuries and is listed in serious condition.

Police believe a medical event was the likely cause of the incident, said Const. Steve Holmes.

The RCMP is expected to release further details on the accident later this afternoon.

Highway 97 has now been reopened.

RCMP Const. Joe Duncan says Highway 97 will likely be closed for the remainder of the morning, as police collision analyst Sgt. Nightingale is on his way to the scene.

Witnesses tell Castanet the two cars involved were both being driven by women, but Duncan could not confirm those details, nor could he comment on the extent of any injuries.

Highway 97 is closed in West Kelowna, near Grizzly Road, after a major head-on collision, Thursday morning.

Witnesses on the scene tell Castanet an SUV and small sedan crashed into one another, sending at least one person to hospital in serious condition.

The highway is shut down in both directions while emergency personnel attend to the scene.

Traffic is being detoured around the accident via Old Okanagan Highway.