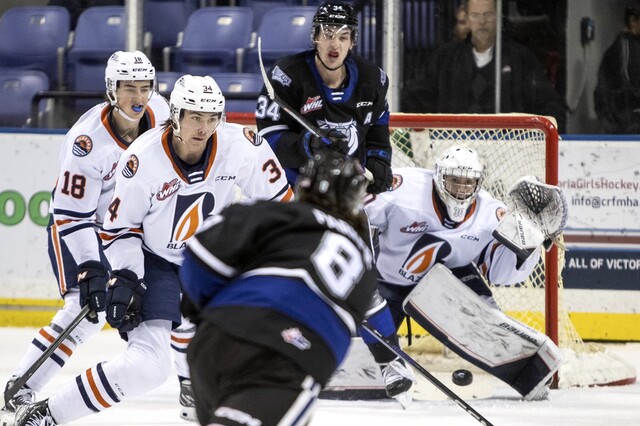 The Kamloops Blazers gave up three goals in less than five minutes early in the second period Wednesday in Victoria, falling 5-2 to the host Royals.

Teague Patton, Tanner Scott, Jake Poole (2) and Matthew Hodson scored for the Royals. Caedan Bankier and Fraser Minten were the goal scorers for the Blazers.

Michael Schnattinger allowed three goals on 15 shots before he was yanked early in the second period. Dylan Ernst made 21 saves on 23 Victoria shots in relief.

The Blazers scored twice on three power-play opportunities. Victoria did not score on two chances.

The Blazers are third in the conference standings, eight points behind the Winterhawks and four points back of the second-place Seattle Thunderbirds (18-4-1-0). The Royals are dead last in the B.C. Division and the Western Conference.

Kamloops had won 24 straight over Victoria dating back to 2019.

The Blazers will be home for a pair at Sandman Centre this weekend, hosting the Vancouver Giants (10-12-3-2) on Friday and the same Royals on Saturday, which is the annual Teddy Bear Toss game.