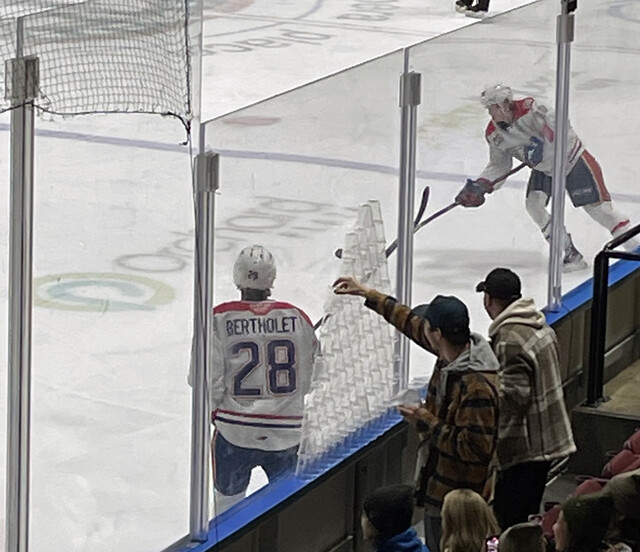 Photo: Sandra Daw
What do fans do when the home team is winning big...build a glass Christmas tree.

It seemed every time the Kelowna Rockets touched the puck Friday night it found the back of the net.

The Rockets hit double digits on home ice for the first time since 2017 in a 10-3 thumping of the visiting Spokane Chiefs.

Lenton, who endured a post game shaving cream face wash, did most of the work to get his first career goal.

He forced a turnover in front of the Spokane net. The puck went to Cristall who gave it back to Lenton alone in the slot.

His one-timer squeezed through the pads of starting goaltender Cooper Michaluk and rolled slowly over the line.

Lenton, in his first season with the Rockets, has been used sparingly as part of the fourth line but made the most of his ice time Friday.

"Through the season I have had quite a few chances," he said following the win.

"It's nice to finally get this one out of the way and hopefully build on that."

It's also more special when it comes in a win.

Graham, who returned to the lineup after missing four games with a lower body injury also got off the schneid, scoring his first of the season

"(Regan) Bartell asked me before the game about him not having any scoring opportunities, and I said he's shooting the puck, but tonight I think if something is going to happen, it's going to go off his butt, or off his skate," said head coach Kris Mallette.

"Hopefully this sets him up moving forward and now he can relax and play some hockey."

With the Rockets up 6-0 by the midway point of the second, Mallette was able to comfortably roll all four lines and all three defensive pairings, giving players who don't normally get a lot of ice time a more regular turn.

"It's a great opportunity for them to just play. It's hard for us as a staff in certain games, when ultimately you want to win but you don't want to jeopardize the development of your group putting them in situations that aren't ideal.

"Tonight was a little bit looser when we were able to play four lines and get those minutes, but again we took nine minor penalties tonight. That's a third of the game where we're killing penalties so they would have even more ice time if that was a lower number."

It was those penalties that stuck in the craw of Mallette. Thankfully, he says it's been the special teams that have helped to bail the team out on more than one occasion this season.

The Rockets allowed just one goal on those nine penalty kills while scoring on two of their three opportunities.