Blazers too much for Giants, earn 4-1 road win in Langley 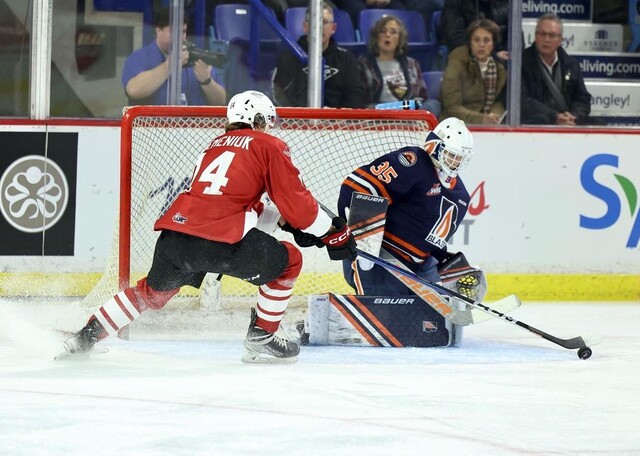 Logan Stankoven scored a goal and had two assists Friday in Langley as the Kamloops Blazers beat the Vancouver Giants 4-1.

Fraser Minten, Caedan Bankier, Stankoven and Kaden Hammell were the goal scorers for the Blazers. Samuel Honzek scored the lone goal for Vancouver.

The Blazers led 1-0 after the first period and the Giants tied the game midway through the second. Bankier put Kamloops back on top two minutes later and Stankoven scored a short-handed goal at 14:24 of the second to make it a two-goal game. Hammell scored on a shot from the blue line at 8:52 of the third to make it a 4-1 final.

Dylan Ernst was solid in net for the Blazers, making 21 saves on 22 shots to earn the win. Jesper Vikman stopped 33 of 37 Kamloops shots in the loss.

The Blazers scored twice on seven power-play opportunities. The Giants were held scoreless on five chances with a man advantage, including a lengthy five-on-three late in the second period.

The Blazers will head south to Portland, where they will take on the U.S. Division-leading Winterhawks (15-1-1-1) on Saturday night.

Their next home game will be on Wednesday, when the Tri-City Americans (7-11-0-0) visit Sandman Centre. Puck drop is 7 p.m.