Rockets let one slip away 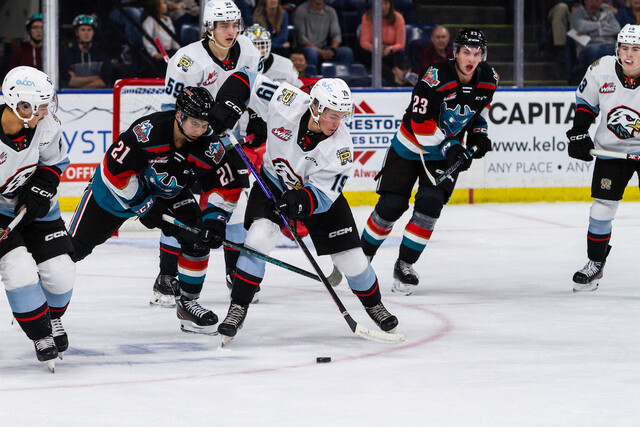 The Kelowna Rockets let a two-goal lead slip away late in the third period, then gave up the overtime winner, falling 6-5 to the Portland Winterhawks in their season opener Saturday night.

The Rockets had a chance to put the visiting Winterhawks away late in the third period, up two with a four-minute power play and less than nine minutes to go.

But it was Portland who seized the momentum when Gabe Klassen found himself alone in front of Jari Kykkanen, and buried his fourth of the night shorthanded.

Just 66 seconds later Portland completed the comeback when a seemingly harmless pass deflected off a pair of skates to Luke Schelter who tapped the puck past a startled Kykkanen.

Luca Cagnoni won it for the visitors with a wrist shot from the high slot during three-on-three overtime.

"They did not stop...for a team that played last night for sure," said head coach Kris Mallette.

"They are always pressing the pace and stretching the zones. Our guys were taken back a little, and on their heels because of it.

"in the defensive zone, we struggled at times to make some real good puck decisions and ultimately it ended up in the back of our net."

Adam Kydd, another player Mallette will be leaning heavily on, produced in a big way in the opener, scoring once and assisting on the other four.

The trio of Kydd, Gabriel Szturc and Andrew Cristall combined for 11 points on the night.

"Kydder has been pretty solid. He's one of those guys that just goes about his business.

"Not flashy, just real consistent. And, tonight he was rewarded for it."

Portland led 2-1 early in the second when the trio started rolling. Szturc backhanded a rebound of Kydd's shot past Dante Giannuzzi to tie it at two then Cristall, on a feed from Kydd just after a power play had expired, put the Rockets up for the first time.

They extended the lead to two on a power play in the opening minute of the third when Cristall banged home his second on a one-timer from the left circle.

But, they couldn't close it out.

"It was a good effort overall for the first game of the season, but a lot of things to work on," said Kydd.

"For the first game it was great to see the fans, and a lot of energy. But, a tough way to finish obviously, but there were a lot of good things."

The Rockets had a couple of good chances to close it in overtime. Turner McMillen and Caden Price found themselves in on a two-on-ones twice in short succession, but were unable to connect on cross ice passes.

The Rockets are off again this week before travelling north for a pair of games in Prince George Friday and Saturday.