Kelowna Rockets improved to 3-1 in the preseason, beating Vancouver 7-3 Friday 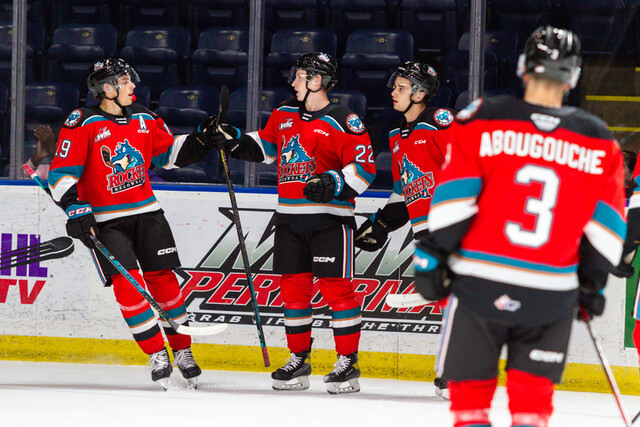 The Kelowna Rockets built up a 4-0 second period lead, and cruised to a 7-3 preseason victory over the Vancouver Giants Friday at Prospera Place.

The Rockets were forced to dress just 10 forwards and 16 skaters due with Colton Dach at NHL camp and some nagging injuries.

Despite the numbers, head coach Kris Mallete was pleased with what he saw.

"I thought we competed well. I really liked our first period. I was happy, Pre season or not, it was a much better game than we played Tuesday against Victoria,"said Malltte.

"It was nice to have six defencemen so we could get into a rhythm. Up front, i was rolling right wingers and I thought our centres did a good job.

"You'd love to have a full lineup...but our young players did some very, very good things, and obviously our older guys led by example.

Second-year forward Gabriel Szturc led the way offensively with a pair of goals, both in the first period, while Marcus Pacheco built on his strong showing Tuesday with three assists against the Giants.

Seventeen-year-old rookies Grady Lenton and Will Munro both scored their first goals in a Rockets uniform while Max Graham, Adam Kydd and Scott Cousins with his third of the exhibition season, also scored for the Rockets.

Nicholas Cristiano turned away 19 shots to record the victory.

The Rockets, who outshot the Giants 38-22, also had their best night of the pre season with the man advantage, scoring on three of their five opportunities.

Kelowna closes out the pre season schedule Saturday when they face the same Giants in Maple Ridge.

Then, it's off to the regular season, which kicks off a week Saturday when they Portland Winterhawks come calling.