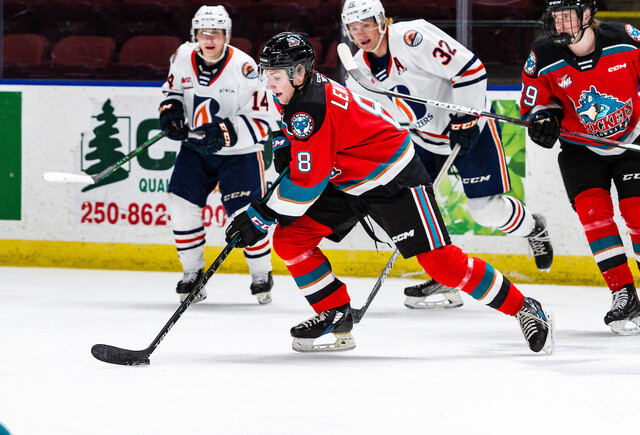 The Kamloops Blazers came back from one and two goal deficits Saturday to register a 6-5 pre season win over the Kelowna Rockets in their 2022-2023 Prospera Place debut.

The more than 2,800 fans who made the trek downtown got more than their money's worth, especially in the second period, when the teams combined for eight goals and two lead changes.

Deadlocked at 1-1 after 20 minutes, the flood gates opened in the second.

Matthew Seminoff and Ethan Brandwood got the part started with power play goals very early in the second to give the Blazers a 3-1 lead.

But the Rockets roared back with four goals in a span of four-and-a-half minutes, including a pair of power play goals of their own to retake the lead 5-3.

Cue the Blazers comeback.when Drew Englot on a power play and Ashton late scored 58 second apart in the dying moments of the period to square it up at 5-5.

A scoreless third sent the game to overtime where Caedan Bankier beat Jari Kykkanen just 45r seconds into the three-on-three extra period to get the victory, and a split of the home-and-home exhibition series.

Nolan Flamand scored twice for the Rockets in the loss while Andrew Cristall, who scored three times the night before, scored his fourth of the pre season and added an assist.

Jake Poole and Scott Cousins with his second in as many nights also scored for the Rockets.

Kykkanen turned aside 39 shots in his second start of the pre season as they Blazers outshot Kelowna 45-35 on the night.

The Rockets will host Victoria Tuesday and Vancouver Friday before closing out the exhibition season against the Giants in Maple Ridge next Saturday.