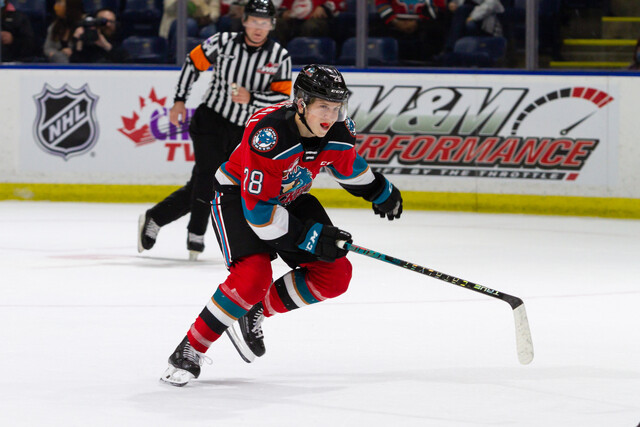 The presumptive first round 2023 NHL draft choice was in mid-season form Friday, scoring three times to pace the Rockets to a 5-2 victory in Kamloops in the pre season opener for both teams.

Cristall bagged the only goals of the first period.

Just two minutes in, Gabriel Szturc hit the post with his shot, but Cristall was there to bang home the rebound.

Before the period was out, Cristall added his second with a shot from behind the goal line that alluded netminder Dylan Ernst.

Connor Levis got one back with a shorthanded goal 67 seconds into the second, but 75 seconds later, Turner McMillen restored the two-goal lead after Scott Cousins had intercepted a pass to set up what proved to be the game winner.

Cristall capped off the hat trick 90 seconds into the third, beating a defender before tucking the puck past Ernst.

Luke Korte cut the deficit to two on a late power play before Cousins iced it into an empty net.

Kamloops outshot the Rockets 33-31 on the evening, as Jari Kykkanen turned away 31 shots for the win.

The Rockets were 0-2 on the power play while the Blazers were 1-4.

The same two teams will meet Saturday back at Prospera Place.