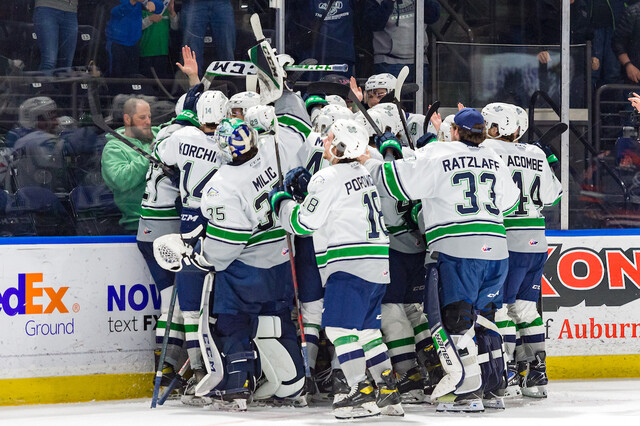 Photo: Brian Liesse/Seattle Thunderbirds
The Seattle Thunderbirds, shown here celebrating an overtime win in Game 4 on May 25, beat the Kamloops Blazers 2-1 on Sunday in Kent, Wash., to force a Game 7 in their WHL Western Conference Championship series.

There will be a Game 7 on Tuesday at Sandman Centre to crown the WHL Western Conference champs, after the Seattle Thunderbirds held on for a 2-1 win Sunday over the Kamloops Blazers.

Kobe Verbicky opened the scoring for the Blazers at 12:53 of the first period. Jared Davidson tied the game early in the second and Lukas Svejkovskly scored the winner for the T-Birds at 3:28 of the third period.

Thomas Milic stopped all but one of 35 Kamloops shots. Dylan Garand made 32 saves on 34 Seattle shots in the loss.

Announced attendance at Accesso ShoWare Centre in Kent, Wash., was 4,345.

Game 7 will go on Tuesday at Sandman Centre — the first Game 7 in the building since 1994, according to Radio NL’s Jon Keen, when the Blazers needed a seventh game to get past the Saskatoon Blades in the WHL Championship en route to their second of three Memorial Cup titles.

The winner of the series will go on to face the Edmonton Oil Kings, who dispatched the Winnipeg Ice in Game 5 of their WHL Eastern Conference Championship series on Friday.