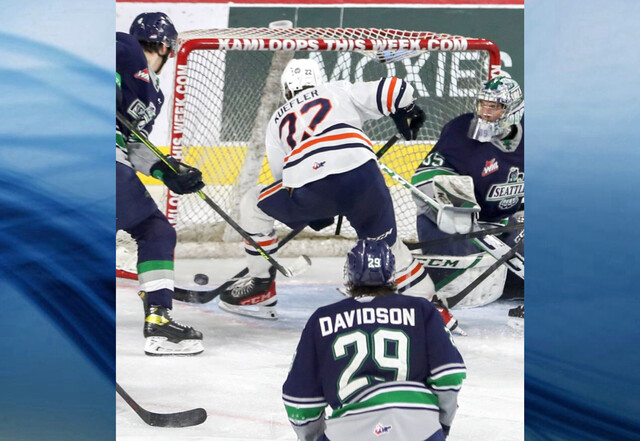 Daylan Kuefler scored the game winner 5:39 into overtime on Friday at Sandman Centre to put the Kamloops Blazers one win away from the WHL Championship series with a 4-3 win over the Seattle Thunderbirds.

The victory capped an electric night on Mark Recchi Way, starting with an announcement that the Blazers would host the 2023 Memorial Cup.

The winner was Kuefler’s second of the night. The other Kamloops goals were scored by Matthew Seminoff and Connor Levis. Conner Roulette, Lukas Svejkovsky and Kevin Korchinski were the goal scorers for Seattle.

The game was a back-and-forth affair, tied 2-2 after 40 minutes before Levis gave the Blazers their first lead of the night five minutes into the third period. Korchinski tied it for the T-Birds midway through the final frame.

Kuefler’s overtime winner came on a rebound after a wraparound attempt from Fraser Minten, who finished the night with a pair of assists.

Dylan Garand made 34 saves on 37 shots to earn the win in net for the Blazers. Seattle goalie Thomas Milic stopped 28 of 32 Kamloops shots in the loss.

Announced attendance at Sandman Centre was 5,124.

The win gives the Blazers a three-games-to-two lead over the T-Birds in the best-of-seven WHL Western Conference Championship.

Game 6 will go Sunday at Accesso ShoWare Centre in Kent, Wash. If necessary, Game 7 will be played Tuesday at Sandman Centre.

The Edmonton Oil Kings scored three goals in a 55-second span early in the first period on Friday and never looked back, skating to a 7-1 to knock the top-seeded Winnipeg Ice out of the WHL Playoffs.

The win gives the Oil Kings the WHL Eastern Conference Championship and a spot in the league final, where they will take on the winner of the Kamloops-Seattle series.

The Ice had been the top seed in the WHL’s Eastern Conference and finished the regular season with the best record in the league. The Ice and Oil Kings finished the season ranked No. 1 and No. 2, respectively, in the Kia CHL Top 10.