Blazers lose to T-Birds in OT 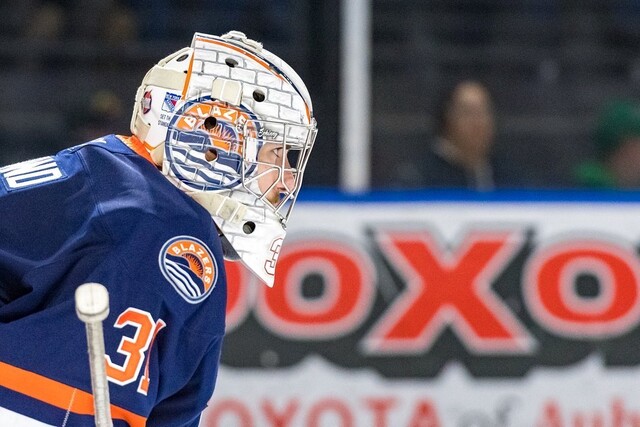 Photo: Brian Liesse/Seattle Thunderbirds
Dylan Garand, shown here in action on Tuesday in Kent, Wash., made 37 saves Wednesday in a losing effort as the Seattle Thunderbirds beat the Kamloops Blazers 2-1 in overtime to even their best-of-seven series at two games apiece.

A 37-save performance from Dylan Garand was not enough to get the Kamloops Blazers in the win column on Wednesday, dropping a 2-1 overtime decision to the Seattle Thunderbirds to even their WHL Western Conference Championship series at two games apiece.

Nico Myatovic scored the game-winning goal at 11:16 of overtime at Accesso ShoWare Centre in Kent, Wash.

Daylan Kuefler opened the scoring for the Blazers with 54 seconds remaining in the first period and Jordan Gustafson tied it at 1:55 of the second.

Garand stopped 37 of 39 Seattle shots in a losing effort. Thomas Milic stopped all but one of the Blazers’ 36 shots on goal to earn the win in net.

The Blazers scored once on four power-play chances. The T-Birds tallied on their only power-play opportunity.

Announced attendance at Accesso ShoWare Centre in Kent was 2,721.

The best-of-seven series is now tied at two games apiece with Game 5 slated to go Friday at Sandman Centre with puck drop at 7 p.m. Game 6 will be played Sunday in Kent. If necessary, Game 7 would take place on Tuesday back at Sandman Centre.

Carter Souch scored twice and Josh Williams added two helpers on Wednesday as the Edmonton Oil Kings doubled up on the Winnipeg Ice to push the WHL’s top seed to the brink of elimination.

Edmonton goalie Sebastian Costa stopped 20 of 22 Winnipeg shots to earn the win in net. Gage Alexander made 32 saves on 36 Oil Kings shots in the loss.

The Oil Kings now lead the best-of-seven series three games to one.

The Ice were the top seed in the WHL’s Eastern Conference and finished the regular season with the best record in the league. The Ice and Oil Kings finished the season ranked No. 1 and No. 2 in the Kia CHL Top 10.