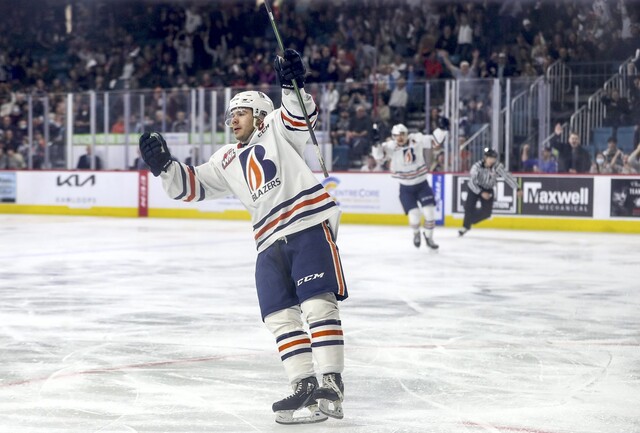 Photo: Allen Douglas/Kamloops Blazers
Logan Stankoven, shown here celebrating a goal on Saturday at Sandman Centre, scored three times on Tuesday in Kent, Wash., as the Kamloops Blazers skated to a 6-3 win over the Seattle Thunderbirds to take a two-games-to-one lead in the WHL Western Conference final.

Logan Stankoven hit an empty net with 75 seconds remaining on Tuesday in Kent, Wash., to earn a hat trick as the Kamloops Blazers doubled up on the Seattle Thunderbirds 6-3 to take a two-games-to-one lead in the WHL Western Conference Championship.

Stankoven (3), Daylan Kuefler (2) and Quinn Schmiemann were the goal scorers for the Blazers. Kevin Korchinski and Jared Davidson tallied for Seattle.

The Blazers jumped out to a 3-0 first-period lead and led 3-1 after 20 minutes. The teams traded goals in the second and third before Stankoven’s empty-netter made it a 6-3 final.

Luke Toporowski, Connor Levis and Schmiemann each finished the night with two assists.

Dylan Garand made 27 saves on 30 Seattle shots to earn the win in net. T-Birds goalie Thomas Milic stopped 23 of 28 in the loss.

Both teams were one for three on the power play.

Announced attendance at Accesso ShoWare Center in Kent was 4,684.

The Blazers now take a two-games-to-one lead into Game 4, which will go Wednesday in Kent.

Game 5 will be played Friday at Sandman Centre. Puck drop is at 7 p.m.

Justin Sourdif scored the game-winner at 8:03 of overtime on Monday to give the Edmonton Oil Kings a 4-3 win over the Winnipeg Ice — and a two-games-to-one series lead.

Game 4 will be played Wednesday at Rogers Place in Edmonton.

The winner of the Edmonton-Winnipeg series will play the winner of Kamloops-Seattle in the WHL Championship.