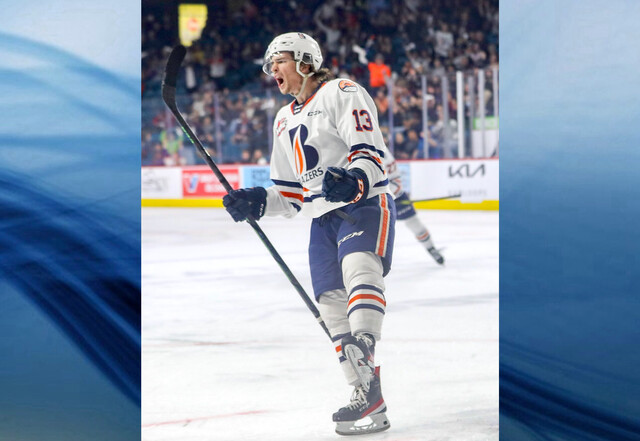 Matthew Seminoff and Logan Stankoven combined for five goals Friday at Sandman Centre as the Kamloops Blazers skated to a 5-2 win over the Seattle Thunderbirds to open their WHL Western Conference Championship series.

The Blazers and T-Birds traded goals early the first period — Seminoff at 8:06 on the power play and Kevin Korchinski less than three minutes later.

Two goals late in the first gave the Blazers a 3-1 lead, and Stankoven made it 4-1 less than a minute into the third. Jared Davidson beat Dylan Garand on a Seattle power play at 17:47 of the third before Stankoven hit an empty net to complete the hat trick with 1:21 to play.

Garand made 36 saves on 38 Seattle shots to earn the win in net. T-Birds goalie Thomas Milic stopped 22 of 26 Kamloops shots.

Announced attendance at Sandman Centre was 4,105.

The Blazers now lead the best-of-seven series one game to none. Game 2 goes Saturday at Sandman Centre. Puck drop is at 7 p.m.

The series will shift to Kent, Wash., for games 3 and 4 on Tuesday and Wednesday.

In the WHL’s Eastern Conference Championship in Winnipeg, Tyler Horstmann scored the game winner at 1:07 of overtime as the Edmonton Oil Kings held on to take the opener 5-4 over the Winnipeg Ice.

The Oil Kings led 4-1 in the third period before Winnipeg scored three times in a five-minute span to tie the game.

Game 2 will go Saturday in Winnipeg before the series moves to Edmonton for games on Tuesday and Wednesday.