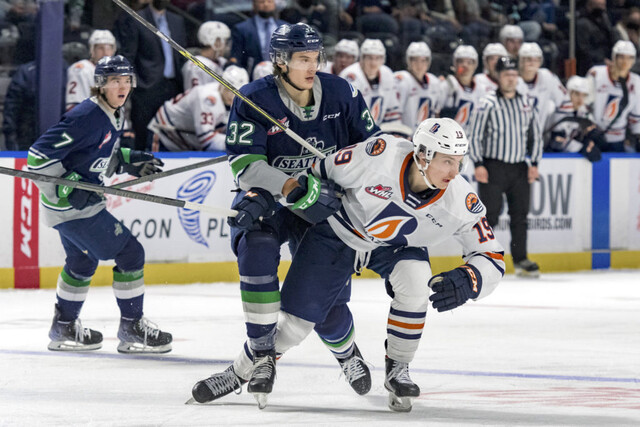 Photo: Brian Liesse/Seattle Thunderbirds
Caedan Bankier battles with Seattle Thunderbirds forward Matthew Rempe in WHL action in Kent, Wash., on Nov. 20. The Blazers and T-Birds will meet in the WHL Western Conference final, which begins on Friday with Game 1 at Sandman Centre.

The Kamloops Blazers now know their dance partner for the WHL Western Conference final, and it will be the Seattle Thunderbirds visiting Sandman Centre for a pair to start the best-of-seven series this weekend.

The Thunderbirds earned a Game 7 win on the road on Tuesday night, beating the Portland Winterhawks 6-3 to advance to the conference final. They won three straight to erase a three-games-to-one deficit.

The Blazers won two of three meetings with the T-Birds during the regular season — a 5-1 win on Nov. 20 and a 4-1 win four days later, both Kamloops wins coming at ShoWare Center in Kent, Wash. The two teams last played on Dec. 10, when Seattle skated to a 6-1 win at Sandman Centre.

Kamloops advanced to the conference final on Sunday with a Game 6 win over the Vancouver Giants in Langley. The Blazers swept the Spokane Chiefs in the first round of the WHL Playoffs.

The Thunderbirds defeated the Kelowna Rockets in five games in the first round.

Game 1 will go Friday at Sandman Centre, followed by Game 2 on Saturday. Game 3 and Game 4 are slated for Tuesday and Wednesday in Kent.

Puck drop both nights this weekend is 7 p.m. Tickets are on sale now. For more information, click here.