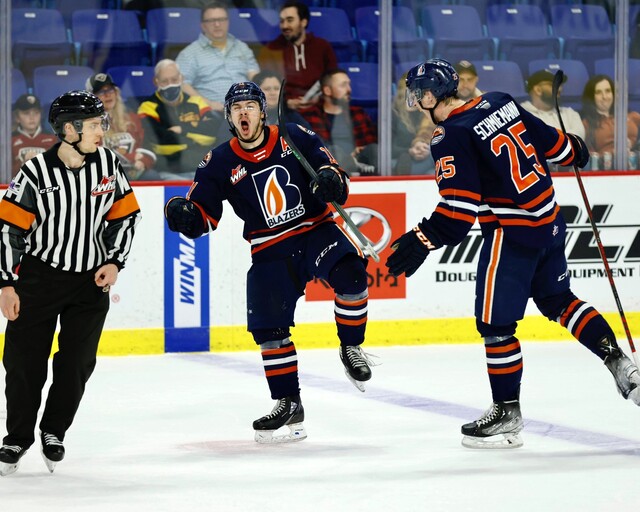 Photo: Rob Wilton/Vancouver Giants
Logan Stankoven (left) celebrates after scoring the game-winner late in the third period on Thursday at Langley Events Centre in a 4-2 Kamloops Blazers win over the Vancouver Giants. The Blazers now lead their best-of-seven WHL Western Conference semi-final three games to one.

Logan Stankoven scored the game-winner on the power play late in the third period on Thursday in Langley as the Kamloops Blazers beat the Vancouver Giants 4-2 to take a 3-1 stranglehold in their second-round WHL Playoffs series.

Luke Toporowski, Caedan Bankier and Stankoven (2) were the goal scorers for the Blazers. Zack Ostapchuk scored both Vancouver goals.

Goals from Toporowski and Ostapchuk had the score tied after the first period. Bankier put the Blazers back on top at 12:59 of the second, and Ostapchuk tied the game one again early in the third.

Stankoven netted the game-winner in a melee in front of the Vancouver net at 17:23 of the third period. He added an empty-net goal with eight seconds remaining.

Dylan Garand made 18 saves on 20 Vancouver shots to earn the win in net. Jesper Vikman stopped 34 of 37 Kamloops shots.

The Blazers scored twice on three power-play opportunities. The Giants were scoreless on one power-play chance.

Game 5 will go Friday at Sandman Centre, where the Blazers will have a chance to end the Giants’ season with a win and punch a ticket to the WHL Western Conference Final. Puck drop is slated for 7 p.m.