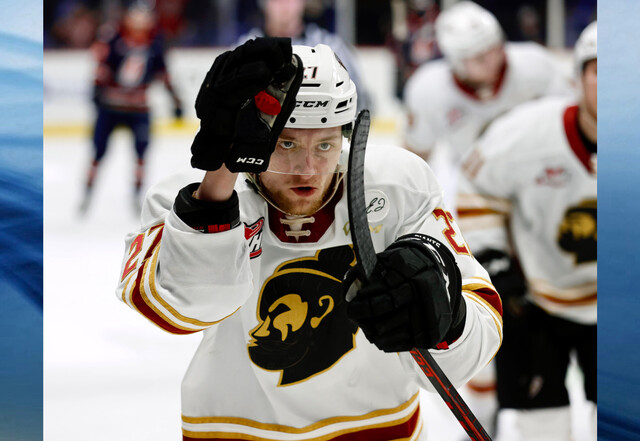 Photo: Vancouver Giants
Alex Cotton celebrates the game-winner in the third period on Tuesday at Langley Events Centre in a 3-2 Vancouver Giants win over the Kamloops Blazers. The Blazers now lead the series 2-1 with Game 4 slated for Thursday.

The Vancouver Giants scored the game-winner on the power play with 3:24 remaining in the third period Tuesday at Langley Events Centre to hand the Kamloops Blazers their first loss of the postseason.

The Blazers now lead the best-of-seven second-round series with the Giants two games to one.

Justin Lies, Ty Thorpe and Alex Cotton were the goal scorers for the Giants. Fraser Minten and Drew Englot scored for the Blazers, while Mats Lindgren had two helpers.

Kamloops trailed 2-1 after two periods. Englot scored a power-play marker at 8:38 of the third, but Cotton beat Dylan Garand to restore the one-goal Vancouver lead at 16:36.

The Blazers came close to tying the game with Garand on the bench for an extra attacker in the dying seconds of the third, but the officials ruled the puck did not cross the goal line after a scrum in front of the Vancouver net with three seconds to play.

Game 4 will go on Thursday in Langley, with Game 5 on Friday at Sandman Centre. Puck drop both nights is 7 p.m.