Blazers hang on for 4-3 win 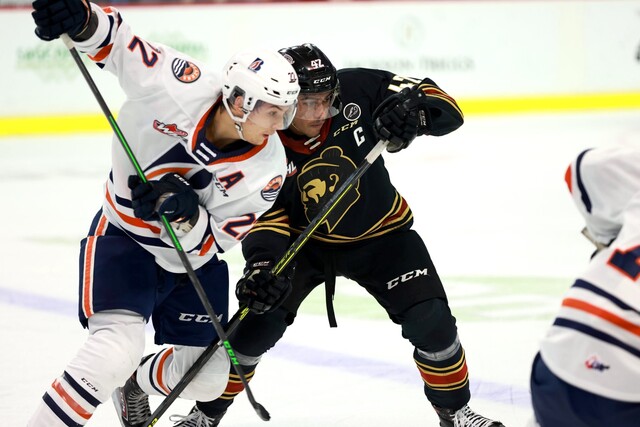 Photo: Rob Wilton/Vancouver Giants
Daylan Kuefler, shown here in a Nov. 13 game in Langley, scored the game-winner on Saturday at Sandman Centre in a 4-3 Kamloops Blazers win over the Vancouver Giants. The Blazers now lead the series 2-0 with the series slated to shift to Langley on Tuesday.

Logan Stankoven and Fraser Minten combined for four assists and Dylan Garand was solid in net at Sandman Centre on Saturday as the Kamloops Blazers held on for a 4-3 win over the Vancouver Giants to take a 2-0 lead in their best-of-seven WHL Playoffs series.

Englot opened the scoring midway through the first but a pair of Vancouver goals late in the period had the Giants up 2-1 after 20 minutes.

Levis and Bankier scored five minutes apart early in the second to put the Blazers back on top, and Kuefler’s game-winner came at 14:21 of the middle frame.

The Blazers had to kill a lengthy five-on-three Giants power play early in the third to keep it a 4-3 game.

Garand stopped 23 of 26 Vancouver shots to earn the win in net. Giants goalie Jesper Vikman made 35 saves on 39 shots

The Blazers scored once on nine power plays while the Giants were held scoreless on five opportunities with a man advantage. Vancouver scored one goal short-handed.

Announced attendance at Sandman Centre on Saturday was 4,192.

Luke Toporowski, who appeared to injure his shoulder in the first period of Friday night’s Game 1 — a 3-1 Kamloops win — did not dress on Saturday.

The Blazers now lead the best-of-seven second-round WHL Playoffs series 2-0 with the series set to shift to the Lower Mainland.

Game 3 will be played on Tuesday at the Langley Events Centre, followed by Game 4 on Thursday. If necessary, Game 5 will be played Friday at Sandman Centre.