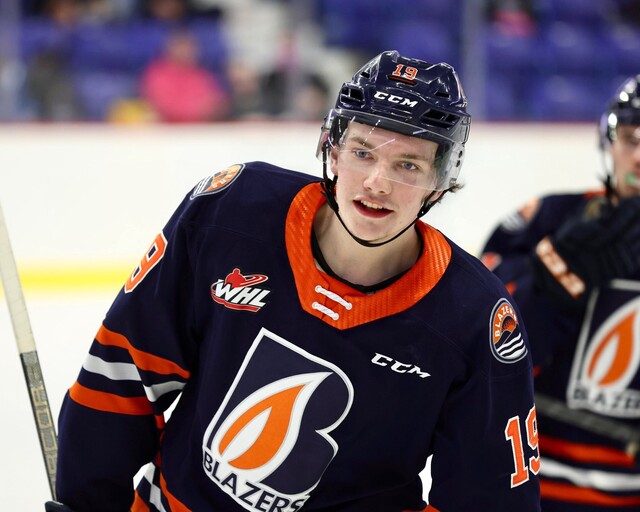 Photo: Rob Wilton/Vancouver Giants
Caedan Bankier had a goal and an assist on Friday at Sandman Centre, where the Kamloops Blazers beat the Vancouver Giants 3-1 to take a 1-0 lead in their second-round WHL Playoffs series.

Caedan Bankier had a goal and an assist at Sandman Centre on Friday as the Kamloops Blazers skated to a 3-1 win over the Vancouver Giants to take a 1-0 lead in their second-round WHL Playoffs series.

The Blazers won the game but might have lost one of their top scorers. Luke Toporowski crashed into the end boards following a scoring chance in the first period. He left the game favouring his shoulder and did not return.

Bankier, Reese Belton and Ethan Rowland were the goal scorers for the Blazers. Adam Hall scored the lone goal for Vancouver.

Bankier opened the scoring late in the first period and then scored twice in the second. Hall got the Giants on the board at 7:04 of the third but that was all the offence the visitors could muster.

Dylan Garand stopped 30 of 31 Giants shots to earn the win in net. Jesper Vikman made 35 saves on 38 Kamloops shots in the loss.

Announced attendance at Sandman Centre was 4,014.

Game 2 will go Saturday with puck drop slated for 7 p.m. right back on Mark Recchi Way before the series shifts to Langley on Tuesday.