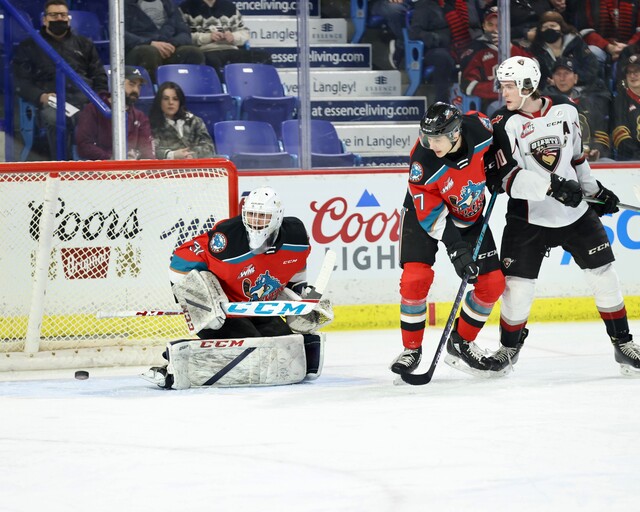 The Kelowna Rockets ran their winning streak to five, earning their first win in the Langley Events Centre - a convincing 6-0 win over the Vancouver Giants Friday night.

Talyn Boyko turned aside all 25 shots directed his way for his second career WHL shutout, and first in a Rockets uniform.

Six different players chipped in offensively for a Rockets team playing without the services of captain Tyson Feist and forwards Colton Dach and Nolan Flamand. Flamand remains week-to-week with a lower body injury while Dach and Feist are on the shelf with non-COVID related injuries.

"I thought the boys competed hard. We were sacrificing from the get go,"said head coach Kris Mallette on the post-game radio broadcast.

"Obviously there could have been some excuses, but the challenge to the players that were in our lineup tonight was to compete...quote unquote...a little grease to our game and played it too a T, and were rewarded for it."

Turner McMillen opened the scoring with what proved to be the game winner late in the period. McMillen beat Jesper Vikeman five hole after being sprung on a breakaway with a perfect stretch-pass from Elias Carmichael.

The Rockets broke it open with three unanswered in the second.

Marcus Pacheco hammered home his second of the the season beating Vikeman short side on a breakaway 12 minutes into the second.

Kelowna all but put it away with goals 21 seconds apart in the final minute.

Pavel Novak picked up his 100th career point converting a pretty three-way passing play from the slot. Then, seconds later, Adam Kydd put an end to Vikeman's night with a rebound from a sharp from a sharp angle.

Mark Liwiski on a shorthanded breakaway and Gabriel Szturc off a pass from Andrew Cristall on a two-on-one closed out the scoring in the final period.

The Rockets outshot Vancouver 28-25 over the course of the game.

Kelowna will look for its sixth straight win Saturday when the same two teams meet at Prospera Place.