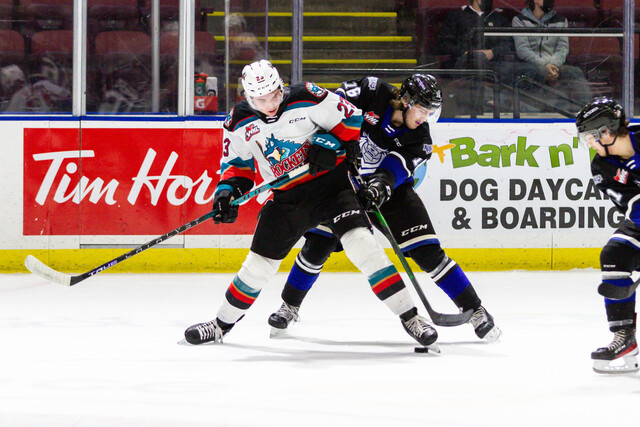 Seemingly home and cooled with a three goal lead after 40 minutes, the Rockets found themselves in penalty trouble in the third

Leading 4-1 after 40, back-to-back penalties early in the third gave the Royals a two-man advantage. Bailey Peach and Riley Gannon connected 29 seconds apart pulling the Royals to within one.

Kelowna eventually righted the ship in a 6-4 win.

"I was interesting to say the least. We did some very good things tonight, and obviously scoring six goals is a big plus for us," said head coach Kris Mallette.

"We got some contributions from a few that haven't scored of late which is really nice, but then there's those little lapses here and there that make things interesting.

"Then, there's the penalties. If we're going to take em, we've gotta kill em, and we just didn't sacrifice enough."

Jake Poole got the Rockets on the board, beating Tyler Palmer with a shot from the edge of the slot four minutes in.

Pavel Novak on a second period power play and Dylan Wightman capitalizing on his own rebound 42 seconds later gave the Rockets what appeared to be a commanding 3-0 lead.

The Royals got one back seconds later, but an opportunistic goal when the puck found Turner McMillen at the edge of the crease restored the three-goal lead.

But penalty trouble carrying over from the second gave the Royals life.

All three Victoria goals in the third came with the man advantage.

It took Scott Cousins' first of the season tipping home Noah Dorey's centering pass, and a great individual effort from Poole during a delayed penalty against the Royals to get them back on track.

The Royals finished three for nine on the man advantage while officially, the Rockets connected on their only opportunity.

"Referees have to make those calls, and we didn't do ourselves any favours by any means.

"In order to get power plays,you have to continue to move your feet and continue to make it hard on them. We thought it was going to be easy, and the referees called what they called."

Boyko has started 16 of the Rockets last 17 games, a workload Mallette says he wants, and deserves with the way he has been playing.

He says Jari Kykkanen is penciled in for some starts as the schedule gets busier in the coming weeks.

The Rockets host Victoria again Saturday before beginning a string of five straight on the road. They have a stretch coming up where they'll play six in nine nights.