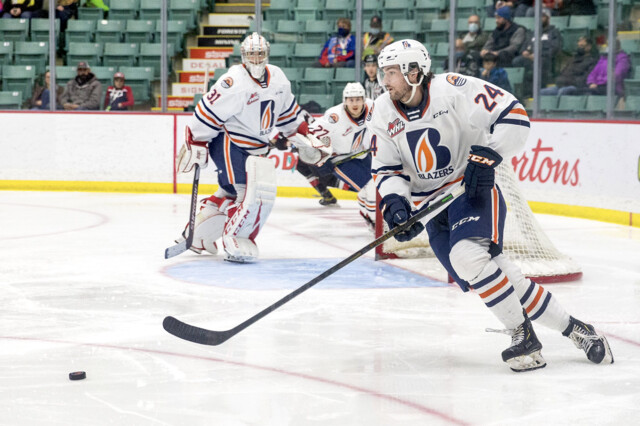 Photo: James Doyle/Prince George Cougars
Ethan Brandwood scored his third goal of the season on Saturday in a 2-1 win over the Vancouver Giants in Langley.

Ethan Brandwood had a goal and an assist on Saturday as the Kamloops Blazers came from behind to earn a 2-1 win over the Vancouver Giants in Langley.

Vancouver’s Fabian Lysell opened the scoring early in the first period, but a pair of quick Kamloops goals in the second — Brandwood 43 seconds in and Logan Stankoven six minutes later — was all the offence the Blazers needed.

Dylan Garand stopped all but one of Vancouver’s 24 shots to earn the win, his WHL-leading 11th of the season. Giants goalie Will Gurski stopped 27 of 29 Kamloops shots in the loss.

Neither team scored on the power play. The Giants had seven chances while the Blazers had three.

The win moves Kamloops to 13-2-0-0 on the season, sitting comfortably atop the WHL’s B.C. Division standings.

The Blazers won’t be back in action until Friday, when the Victoria Royals visit Sandman Centre. The Blue and Orange will then cross the border for their first U.S. Division road trip since pre-pandemic play in March of 2020.