Rocket: I missed the smell 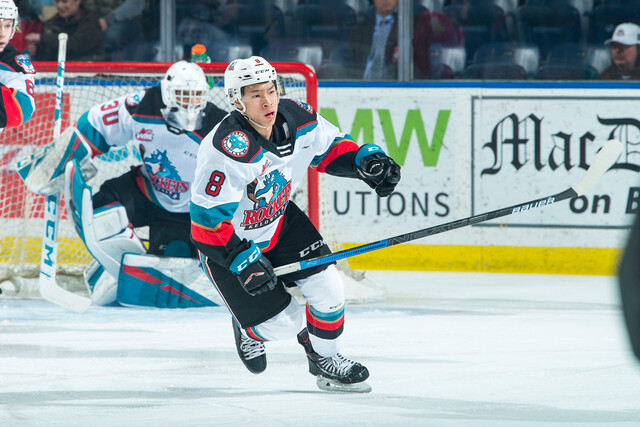 Adversity has a way of giving life perspective.

No matter what, there's nothing more important than family and friends.

COVID-19 had that affect on Kelowna Rockets forward Trevor Wong.

The toughest part of the last year for Wong wasn't wondering when he would play hockey again, it was watching people he cared about battle through a virus he says is "much more serious than people think."

"When you first hear about this pandemic, your first thought is your health. You're not thinking about your hockey season, you're thinking about staying healthy," Wong said this week

"It hit home when you find out people you know got it, and they are battling. Your family, your friends, and just your well being comes first."

Wong, who won't turn 18 until May 4, is back in Kelowna along with the rest of his teammates, preparing for a brief 24-game season, which begins Friday.

Wong has spent the last year keeping busy with school, training in the gym and on the ice. He says he was lucky his gym in Vancouver has been open since May, and he's been able to work out on the ice in Delta.

And, while he's done what he can to keep his body in shape, Wong admits the last year has also brought the mental side more into focus.

"You have to take what you have in the moment," Wong said when asked about trying to stay positive.

"It was really tough for everybody in the WHL, and everyone in the world. You can't get down on yourself, and you can't think our season is never going to start. You have to always be prepared and think positive that it will happen."

Wong admitted he had his doubts early on, but eventually, as things began to shift, there was hope it was going to happen.

The Vancouver native is only in his second season with the team, but already, he'll be looked at as one of the leaders on one of the youngest teams in the league.

Both the Rockets and Victoria Royals have 12 rookies among their 26-player roster.

"We have a lot of new faces coming through the pipeline, so for me being in my second year, I'll have to be a role model, show the young guys the way. Lead by example.

"I'm not going to put a lot of pressure on myself. I'm just going to enjoy these 24 games. Don't take any nights off and just enjoy it."

All in all, Wong says, it's great to back in Kelowna, to see and skate with the guys he hasn't seen for over a year, to see Prospera, and yes, to smell Prospera.

"It seems kind of weird but it has a distinct smell and I love it."