Is it really 'attainable?' 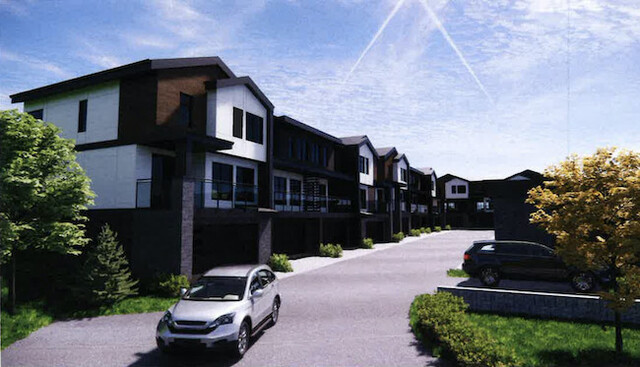 The word "attainable" can mean different things to different people – but it's a safe bet $800,000 wasn't what was meant by the "missing middle" during discussion of Vernon's Housing Action Plan.

However, the picture of Vernon's housing market is not as clear cut as it may seem, says a city councillor who is also a mortgage broker.

Landing resident Inge Friesen says the development was approved on the basis that it would meet two of council's strategic objectives: increasing the number of new units in existing neighbourhoods with close proximity to services, and increasing attainable housing.

"Existing single-family dwelling (owners) in this neighbourhood on one-third-acre lots would be hard-pressed to trade up to these townhomes. Clearly, this development is not close to 'attainable,'" she says.

That's because homeowners in a $500,000 home may wish to move up to the new units, freeing up a more affordable home, and so on.

"Creating new units allows people to move up ... it's always about the possibilities," Gares said in a telephone interview. "It's usually market driven."

If homeowners are looking to "build up" or "size up," that typically opens up units that may be attainably priced in other areas of the city, says Gares.

The term 'attainable' typically means financing of the home would take no more than 30% of the buyer's income.

Other factors also affecting affordability and what exactly 'attainable' may mean to a prospective buyer include mortgage rates and lenders' stress tests, which were brought in to make sure home buyers can withstand a rate jump.

"It shifts and changes, depending on market conditions," said Gares.

At Monday's council meeting, Gares and Coun. Kelly Fehr said local developers are the key to building more attainable housing for those who have been priced out of the market.

The city's Housing Action Plan, endorsed in September, called it the "missing middle."

Vernon needs 445 new units a year to keep up with demand, Gares said at the meeting.

Friesen said she knows development is inevitable, but: "My argument is, that development must also improve our neighbourhood – by extending sewer to existing residents, building better roads, or sidewalks or multi-use paths to improve walkability, or dedicating parkland."