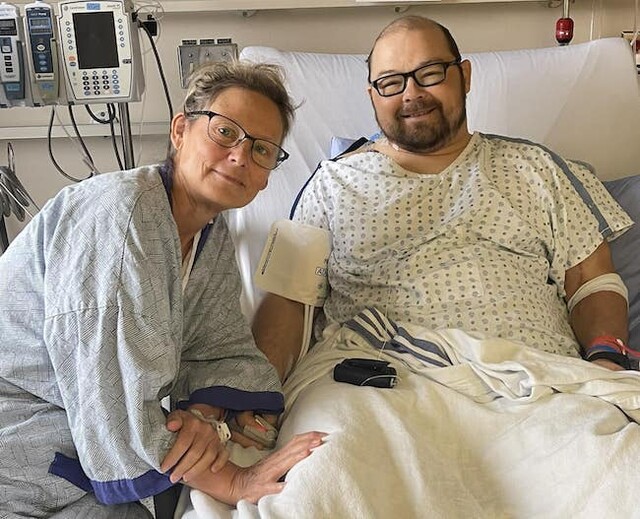 Recipient and donor are both reportedly doing well after a Lumby man's organ transplant surgery in Vancouver on Monday.

Kidney donor Pam was able to visit Cole Derry at his bedside at Vancouver General Hospital on Wednesday, and Derry was even strong enough to get out of bed briefly.

"It's a good day! Managed to snag a picture of these two together... Both of them are doing pretty darn good considering," an update on the Cole's Kidney Journey Facebook page says.

Both parties are said to be "doing really well"

"Of course, both are in some pain, but not too many complaints."

The new kidney continues to function as anticipated.

Meanwhile, with six to eight more weeks in Vancouver for recovery, friends and family have refreshed a GoFundMe campaign to support Cole and his partner, Karen.

"Karen and Cole typically don't like to ask for help too often, but they need your help this time," the fundraiser page states.

"Since they cannot live in the hospital, they will need a place to stay for the months following the transplant, to be close to clinics and follow-up appointments."

This is the second transplant for Derry, after a first attempt was rejected by his body in 2020.

You can donate via GoFundMe or e-transfer to [email protected].