A highway daredevil's spill on Highway 97 followed a hair-raising ride through Vernon on Monday.

After video of the "bumper hitcher's" ride on the back of a transport truck went locally viral with hundreds of comments and reactions on Facebook, more video of the dangerous stunt has emerged.

"I was minding my own business at a red light near Mr. Mikes when this guy jumped on a cube van right in front of me. He drove off, flicked his cigarette and waved like it was completely normal," Jacqueline Shields posted in the Vernon Rant and Rave (uncensored) Facebook group along with new video shot near the beginning of the ride.

"Just another day in Vernon, I guess," Shields wrote.

Nathan McAllister posted the original video, which showed the man stepping down from the truck bumper and "surfing" along on his feet before tumbling to the blacktop by the Department of National Defence grounds on Highway 97.

The truck carried on, with the driver seemingly unaware of the incident. 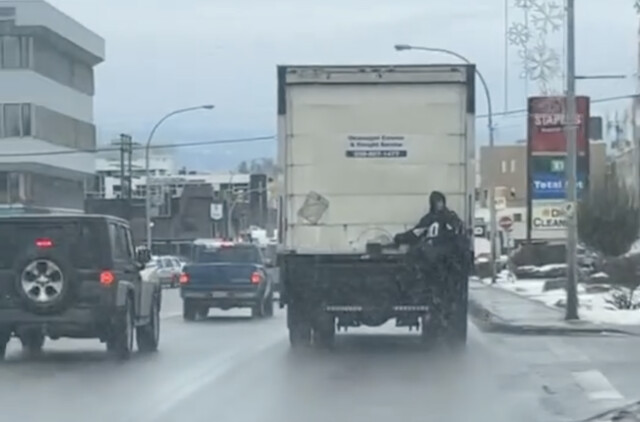 The dangerous stunt spanned out over a more than 25-block distance, beginning north of 39th Avenue and winding up at the top of Hospital Hill, near the Vernon cadet camp.

The man didn't appear to be seriously hurt, as he was seen sitting up after the spill.

In Shields' video, the unknown man can be seen casually hanging onto the back of the truck as it moves through busy highway traffic and several intersections.

Needless to say, such behaviour is highly discouraged.

Vernon RCMP spokesperson Const. Chris Terleski says: "This is a terrible idea, and no one should ever do this. It's incredibly dangerous and can have serious or even fatal consequences." 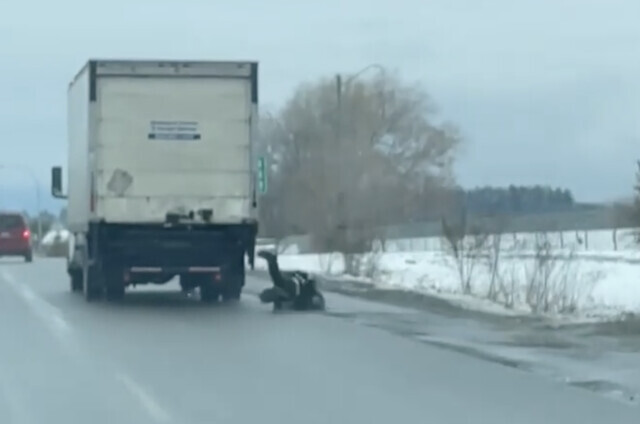