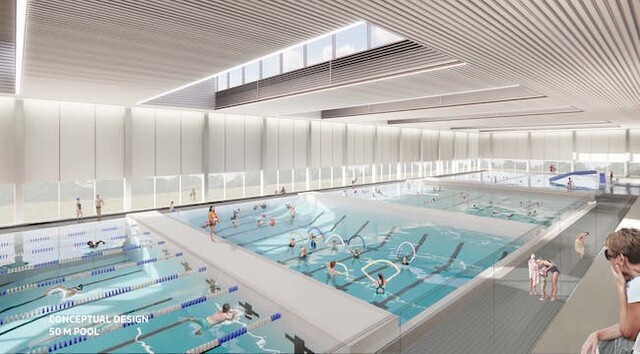 The City of Vernon says a new aquatic centre at the proposed new Active Living Centre will accommodate both community and competition needs.

In its latest dispatch about the centre, the city says if a new aquatic centre is built, it needs to "meet the everyday aquatic needs of a growing community while also having the ability to host events."

The new rec centre is the focus of a referendum Oct. 15 in conjunction with the municipal election.

The city is seeking to borrow $121 million to build the facility, which would be built next to Kal Tire Place at Kin Park.

The city says a couple of key questions have come up regarding the versatility of the proposed aquatics amenities. Following are its responses:

Conceptual drawings don’t show many fixed aquatic play features. Why is this?

Based on public input during the 2018 Greater Vernon Recreation Master Plan and subsequent Active Living Centre Feasibility Study, it was determined if a new aquatic centre is built, it needs to meet the everyday aquatic needs of a growing community while also having the ability to host events.

The proposed aquatics facility does not include permanent fixed amenities such as a wave pool or wave rider, which tend to lose public appeal after time and can be expensive to maintain. Instead, the recommendation is to include primarily portable play features in order to provide versatility for aquatic programming (including public swimming) and have the ability to host 25-metre and 50-metre swim competitions.

Familiar features such as slides, interactive sprays, bubblers, a rock-climbing wall, water walking mat and rope swing can easily offer play opportunities, along with more dynamic portable amenities such as a floating Wibit or Ninjacross course that can be used on a rotational basis.

If electors vote in favour of the referendum question, another round of public engagement will take place during the design phase to help inform the final design of the facility, including what play features will be included in the pool.

Lap swimming and leisure swimming require different water temperatures. How would this be accommodated?

If the Active Living Centre is built, the pools in the facility would be maintained similarly to the Vernon Aquatic Centre.

Recreation services currently maintains the lap pool at the Vernon Aquatic Centre at a temperature of 28C/82.4 F. When there is a swim meet, the lap pool temperature gets lowered to 26.67C/80F and then gets raised back up following the competition.

The proposed leisure pool in the Active Living Centre would be set at a similar warmer temperature and includes 3 x 25m lanes of warmer water that can be used for activities such as aqua therapy and pre-school swim lessons.

For more information on the proposed centre, click here.