Another break and enter at Vernon's Helmut's Sausage Kitchen 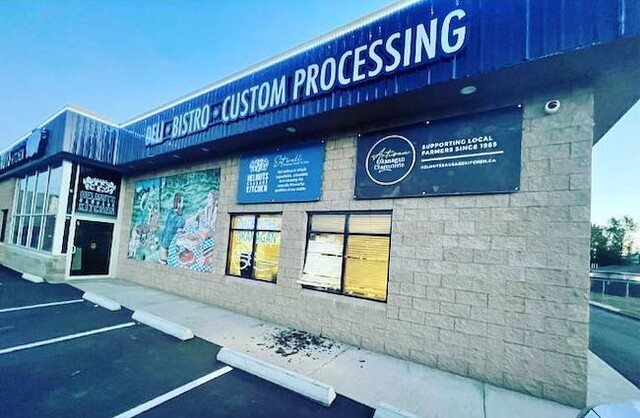 A Vernon business says it's fed up with crime at its two local properties.

Helmut's Sausage Kitchen posted on its Facebook page Tuesday, saying it had been the victim of a break and enter overnight.

The break-in apparently happened just before 5 a.m. and was discovered by staff arriving for work.

It's not known what may have been stolen or the extent of any damage inside the property, but photos posted by Helmut's showed a smashed window on the front of the building.

"Hey City of Vernon. S**t’s getting real old! Commercial B&Es seem to be the norm and to be expected.
What is the city doing about it?!" management wrote on the business's Facebook page.

The incident isn't the only one to hit the business.

In May, vandals struck at Helmut's commercial production facility under construction on Middleton Mountain.

Two suspects in a red pickup were caught on surveillance driving into the unfinished building, smashing roughed-in plumbing connections at the Waddington Drive worksite.

Prior to that, copper grounds stripped from the site with thieves cutting right into the concrete foundation, said owner Helmut West.

"Criminal consequences are too marginal for them to care," a frustrated West said at the time.

West says this is the fourth B&E between the two locations over the past year.

In the latest incident, Helmut's asked the public if anyone had seen a suspect on a bicycle and wearing a hi-vis vest acting suspiciously in the area.

Police were called in all the incidents.