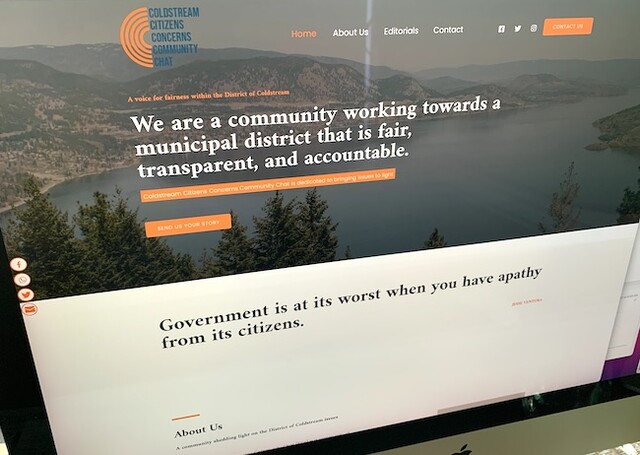 A secretive political watchdog group that emerged in Coldstream over the summer won't say whether it has ambitions in the coming municipal election.

Coldstream Citizens Concerns Community Chat, or Coldstream Concerns for short, says it is comprised of an undisclosed number of citizens with the goal to "raise awareness of Coldstream citizens advocating for fairness of governance."

It lists its areas of concern as:

It claims the land for the Sun Country Cycle building at Coldstream Station was subdivided and sold at more than $100,000 under assessed value for $260,000, without public consultation.

The assessed value of the lot had a market value of $361,000 on July 1, 2021, the group says, questioning the sale price during last year's heated real estate market.

Thus far, members of the group have refused to identify themselves – even confidentially – in interview requests from Castanet.

They also declined to specify whether Coldstream Concerns would be fielding or endorsing candidates in the municipal election.

No member of the group was willing to come forward, but Castanet did receive a call from its website developer.

"As a general rule of thumb, we do not respond to anonymous inquiries or complaints. We would need the names of the individuals asking questions before we would formally respond," Seibel said in an email.

Other issues the group has taken aim at include the rebuilding of Westkal Road, Lavington Park, and the cost of political leadership.

It has only made six posts since August.

Coldstream Concerns' 'about us' page says it is "working to bring accountability in the governance of the District of Coldstream."

"This forum will provide an opportunity for Coldstream taxpayers to voice their concerns and bring attention to local issues that are not being handled in the best interests of the taxpayers. It is our hope the elected officials will listen," it says.

In an email, an anonymous spokesperson described what they called an "almost god-like complex" at Municipal Hall.

Another thing it hopes to change is voter apathy, encouraging residents to vote on election day.

"As to our website and the group's formation, the individuals involved wish to remain anonymous, so chatting publicly is not in the game plan," it wrote.