Wildfire grows to nearly 5 hectares in Kalamalka Park in Coldstream 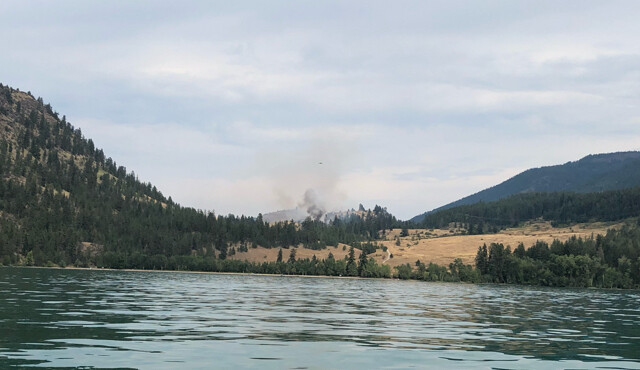 The Cosens Creek wildfire has grown to nearly five hectares so far, according to an update from BC Wildfire Service.

The BCWS dashboard now lists the fire at 4.60 hectares.

The fire started burning in Kalamalka Provincial Park, southeast of Vernon on Friday afternoon before planes and helicopters started to hit the blaze from above.

BCWS ground crews were joined by the local fire department to action the fire.

The cause of the fire is still under investigation.

BC Wildfire Service said the Cosens Creek wildfire located southeast of Vernon within the Kalamalka Lake Provincial Park is still estimated at one hectare in size.

There are nine personnel, four helicopters as well as the local fire department that are on scene, according to Fire Information Officer Shaelee Stearns.

The cause of the fire is still under investigation.

Stearns said plans for the evening are for crews to continue to respond and have helicopter support where needed.

Response to the fire will continue to be monitored through fire activity conditions that are weather dependent.

The BC Wildfire Service is still classifying the fire as "out of control," and nine firefighters are now on scene.

"The helicopters are on standby while the air tankers complete their objectives," said Shaelee Stearns. "Then the [four helicopters] should be back on it as well."

No structures are threatened by the fire at this time.

Cosens Bay Road into the park remains closed as crews work to knock down the fire.

The wildfire burning south of Vernon in Kalamalka Provincial Park is currently about one hectare in size, according to the BC Wildfire Service.

In a Tweet Friday afternoon, the BCWS says the fire is burning in timber and grass, and it's exhibiting Rank 2 and 3 behaviour. This means the fire has an “organized flame front with moderate rate of spread and occasional candling.”

The Cosens Bay Road into the area has been closed to the public. The fire is highly visible from Highway 97, Vernon and surrounding areas.

The BC Wildfire Service is responding to the Cosens Creek wildfire (K41571) located eight kilometers southeast of Vernon within the Kalamalka Lake Provincial Park.

BC Wildfire Service ground crews are en route to the fire burning in Kalamalka Provincial Park Friday afternoon, while planes and helicopters hit the blaze from the above.

The fire appears to have been sparked some time around 3:15 p.m. Friday afternoon, in the grasslands area above Cosens Bay.

BCWS fire information officer Aydan Coray says they don't have a size estimate for the fire at this time, but a Birddog aircraft is currently in the air assessing the fire.

One witness told Castanet the fire appears to be growing quite quickly, although there does't appear to be much wind in the area.

In addition to three water tankers dropping retardant, two helicopters are bucketing the fire, scooping water from the nearby Kalamalka Lake. Coray is urging boaters in the area to stay out of the way of the helicopters.

A fire is burning in Kalamalka Provincial Park, southeast of Vernon, Friday afternoon.

Pictures sent to Castanet show smoke in the hills around the Cosens Bay area in Coldstream.

Witnesses say a helicopter was initially on scene, dumping water on the flames, and three water tankers are now hitting the fire.

One witness says there doesn't appear to be much wind in the area.