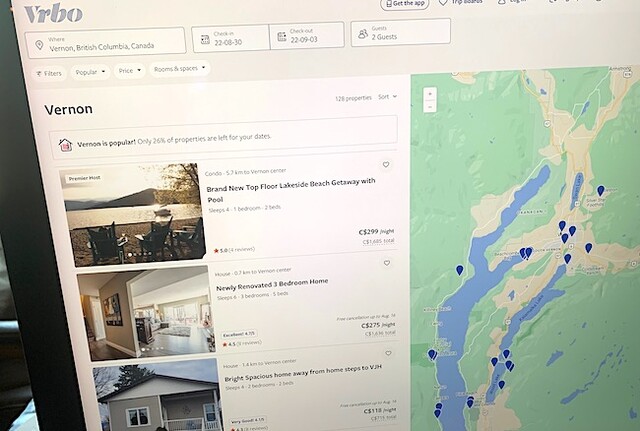 Vernon council will consider implementation of short-term rental regulations in the city at its meeting on Monday.

Council directed staff to seek public feedback in June, and results of that consultation were presented to the Affordable Housing Advisory Committee, Advisory Planning Committee, and Tourism Commission.

"The advisory bodies expressed strong support for prioritizing retention of affordably-priced rental housing in the city over the long term, while enabling STRs at an appropriate scale to meet tourism industry needs. They encouraged continued collection and sharing of data on housing metrics and a grace period for operators to come into compliance with any new regulations," a report to council states.

A survey on the subject gathered 600 responses, including about a quarter of the known STR industry in Vernon.

The survey found 29% of respondents agree with the proposed regulatory approach, while 24% feel neutral about it, and 47% disagree with it.

"The open-ended comments demonstrate that while a minority of respondents feel there should be no regulation at all, the majority supported a well-regulated STR industry, where all operations were licensed and licensing requirements were enforced in a robust manner," the report states.

The results were consistent with those from a similar survey in 2020.

The report suggests regulating the industry "can help to protect future rental housing availability and mitigate rental price inflation," but that public feedback "suggests that introducing STR regulations may not result in many existing STR units converting to long-term rental units.

Thirty-five survey respondents reported that they run whole home STR operations. The overall number of such operators in the city is not known.

Council will consider a timeline for the implementation of licensing along with use of a contracted third-party STR compliance monitoring service to create a short-term rental/bed and breakfast database.