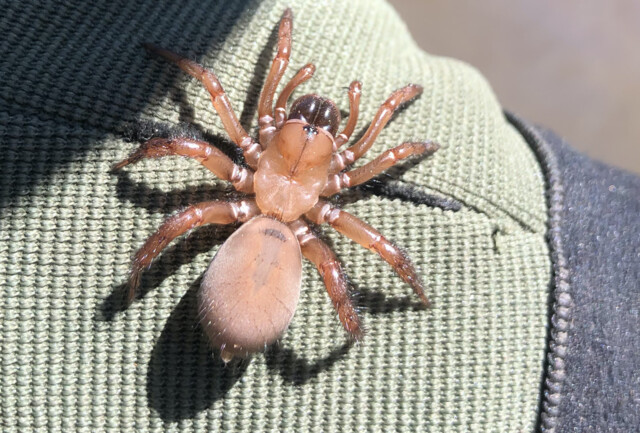 Today's bug of the week will creep out those with arachnophobia, but to some it could even be considered pretty.

Darrell Orlesky snapped a pic of a rather imposing-looking arachnid he spotted in the Beaverdell area.

The question is, what kind of spider is it?

An internet search for “Okanagan spiders” turns up a long list of eight-legged critters.

But, this specimen with its unique leg markings is believed to a Pacific folding door spider, a member of the tarantuloid family.

According to Wikipedia, the folding-door spider, also known as a trap door spider, is difficult to see when the door of its trap is closed because plant and soil materials effectively camouflage it.

“The trap door is hinged on one side with silk. The spiders, which are usually nocturnal, typically wait for prey while holding on to the underside of the door with the claws on their tarsi.

“Prey is captured when insects, other arthropods, or small vertebrates disturb the 'trip' lines the spider lays out around its trapdoor, alerting the spider to a meal within reach.

“The spider detects the prey by vibrations and, when it comes close enough, leaps out of its burrow to make the capture.”