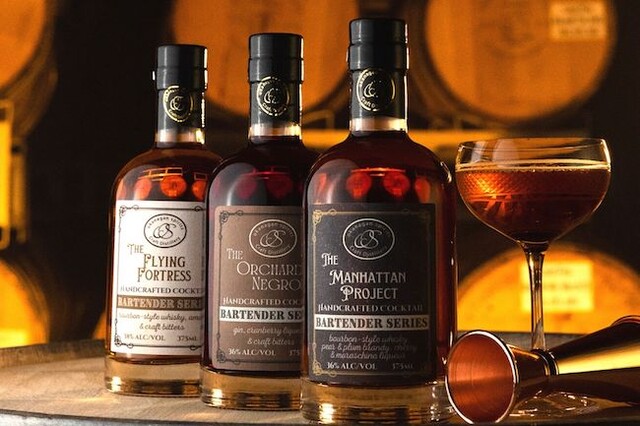 The distillery, which also has an outlet in Kelowna, says its Bartender Series takes the work out of recreating your perfect signature cocktail and is sure to impress at your next patio gathering or barbecue.

"Or maybe you are just not wanting to cart 12 different ingredients with you," Okanagan Spirits says.

Made entirely from farm-to-flask products, The Flying Fortress is the third release in the series, with the other two being The Manhattan project, and The Orchard Negroni.

Each is designed to be ready to savour, either neat or on the rocks in their "classic" stirred form, or can be transformed into shaken cocktails with the addition of fresh-squeezed citrus and one of Okanagan Spirits' simple syrups.

Flying Fortress and Manhattan Project are bourbon-style creations, while Negroni uses gin as its base.

The bottled cocktails can be purchased individually or in a three-piece box set.

"Distilled from our locally grown malted barley, and then aged in our custom white oak casks before being finished in Quails' Gate fortified old-vines Fortified-Foch French Oak barrels," the small-batch whisky is available exclusively through an annual lottery.

The commemorative release comes in a special anniversary package and celebrates two decades of renaissance in the craft distillery sector.

The lottery to purchase a bottle of the coveted elixir closes Sept. 26.