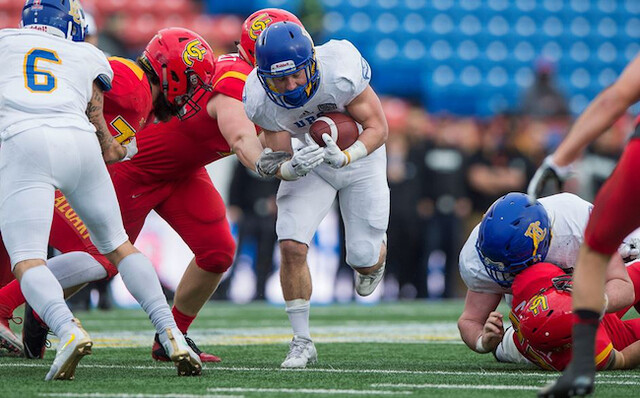 The UBC Thunderbirds and University of Calgary Dinos will do battle in Vernon for the Kalamalka Bowl.

The game brings Canada’s highest level of amateur football to the North Okanagan.

The newly formed Kalamalka Bowl Society says the teams will hit the field at Greater Vernon Athletic Park Aug. 24 at 7 p.m. in the pre-season contest.

“This will be the first university football game ever hosted in the North Okanagan,” says society member Sean Smith, head coach of the Vernon Secondary School Panthers.

Both teams will have players on their rosters who grew up and played high school or minor football in the Okanagan.

“I think this is a tremendous chance to showcase our football to fans in the Okanagan,” said UBC head coach Blake Nill. “It’s a game featuring the last two Canada West teams to win the Vanier Cup. It’s a big rivalry.”

“We’re very excited to come to the Interior and to Vernon,” said Dinos head coach Wayne Harris. “There’s a number of players from Vernon and Kelowna who have done very well, and to bring these guys home to play in front of family and friends is going to be special. It will be a good show and I’m looking forward to it.”

A youth football skills camp will be held the day prior, with both teams taking part.

The camp is open to players 13 and under from Vernon and neighbouring minor football organizations.

Registration will be set up via the Vernon Minor Football website and kalbowl.com.

Tickets for the game ($22 bleachers, $12 for standing) are on sale via Eventbrite.

“The Greater Vernon Athletic Park was built almost 10 years ago and has yet to host an event of this magnitude,” said Malcolm Reid from the society. “We are projecting that the Kalamalka Bowl will attract significant community attention and energy in August 2022 and in the years to come.”