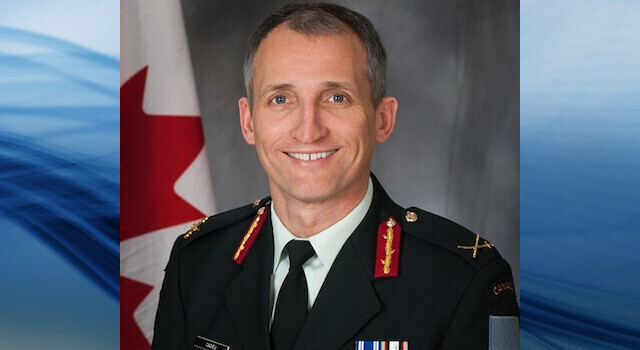 Provost Marshal Brig.-Gen. Simon Trudeau says the charges relate to incidents alleged to have taken place in 1994 at the Royal Military College in Kingston, Ont.

Cadieu was supposed to take over as commander of the Canadian Army last September, but his appointment was suspended due to a military police investigation.

He then retired from the service in April, and sources say he travelled to Ukraine to help defend against the Russian invasion.

Civilian police decided not to accept the case because the military investigation was nearly finished.

Cadieu, who previously denied any wrongdoing, was born in Saskatchewan and raised in Vernon, where he was an air cadet before joining the Canadian Armed Forces.

Sources close to local cadet organizations say they recall Cadieu and his brother training in Vernon.

Cadieu is the latest in a string of military leaders to face allegations of misconduct.

He previously served in Bosnia and Afghanistan and was about to be installed as head of the army when the revelations were made public.

The ceremony was postponed two days before it was due to happen after the investigation service announced it is investigating "historical allegations" regarding Cadieu.

A 29-year veteran of the military, Cadieu most recently provided analysis to the chief of defence staff.

"The allegations are false, but they must be investigated thoroughly to expose the truth," Cadieu said last year.

Cadieu spent 17 years of his military career with the 3rd Canadian Division in both regular and reserve units. Upon his commissioning in 1995, he was posted to the Lord Strathcona’s Horse regiment in Edmonton.

He is a recipient of the Meritorious Service Cross.

In Kandahar, he served as as reconnaissance squadron battle captain and later as a Leopard tank squadron commander. He also commanded the Canadian task force in Jerusalem as part of Canada’s commitment to Palestinian security, and assumed command of the 3rd Canadian Division/Joint Task Force West in 2017.

Vernon's cadet camp opened in 1949. During the Second World War, it had been used as a infantry basic training centre. The 223 Red Lion Squadron Air Cadets still train just across the highway on the Department of National Defence grounds.