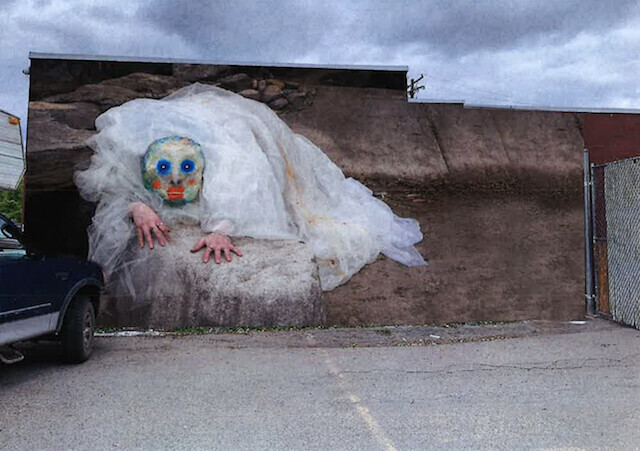 Vernon council has backtracked on its approval and funding of murals depicting masks after they inspired strong feelings both for and against.

“Obviously, there has been some outcry from the community,” Coun. Akbal Mund said during Monday's council meeting. “I don’t think the community is ready for this.”

Though council approved the downtown project at its May 30 meeting, the decision was brought back Monday for reconsideration.

Council voted to undo its approval and send the ‘Behind the Mask’ project back to the Vernon Art Gallery for more consultation as well as to reduce the scope of what’s being proposed.

Coun. Scott Anderson read a lengthy prepared statement in which he began by congratulating local residents who helped create the masks used in the photos, adding he hoped they knew the discussion wasn’t about them.

He worried that people would be exposed to the art without their consent.

“Every citizen of Vernon will be looking at them for many years,” he said. “These murals will be seen whether the viewer wants to or not. They can’t be avoided.”

He said the murals go beyond art and are rather a statement about how we see ourselves. They’ll also influence how visitors see the city, he said.

Anderson complained of the “utter lack of public consultation.”

He said though council wasn’t required to seek public opinion on the project, that doesn’t mean they shouldn’t have.

“This issue is a poster child for public consultation,” he added.

Coun. Kari Gares, who wasn’t at the meeting where it was initially debated, said she was disheartened by comments from the public over the project.

She said the rationale behind approving the murals was “out of a place of good intentions.”

“Mental health is a big issue right now,” she said.

The project features Calgary artist Katie Green, who has been working with the gallery’s engagement curator and the harm-reduction program co-ordinator at Turning Points Collaborative Society. They led participants through workshops where they made masks while going through a storytelling process. After the workshop, participants were photographed wearing their masks in a setting of their choosing.

Gares said the art involves individuals in the community who are suffering and that the public response has been upsetting.

“I just ask the community to be respectful,” she said. “Understand that this particular project is designed wholeheartedly to bring awareness.”

Anderson said he doesn't agree with the insinuation the public wasn’t “ready” for the art. He called such a suggestion “elitist.”

“If somebody doesn’t like something, it doesn’t mean they have to learn to like it,” he said. “People are able to reject something on their own merits for whatever reason.”

Shortly after council approved the murals, a petition was launched to stop the project.

"The murals are both costly and unattractive," wrote Sharmay Taylor who created the petition. "They are frightening to me, so I can imagine they would be scary for young children."

The petition asks that Vernon residents have their say on whether the project moves ahead.

A counter-petition in favour of the murals was then launched.