Light on a dark past 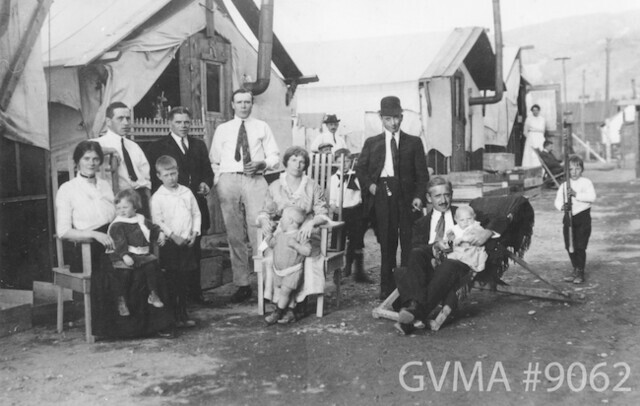 Photo: Museum and Archives of Vernon

A Vernon art exhibit will shine a light on dark part of Canada's past.

Pause in Plight is a touring exhibition making its way across Canada between 2020-25 to help bring awareness to the historical injustice of internment during the First World War.

An interment camp comprised mostly of Austro-Hungarian and German descent was located in the field where WL Seaton is now located.

Before the camp closed in February 1920, some 1,100 men, women and children had passed through its gates.

Gallery Vertigo, in partnership with the Artist Michelle Loughery Sunflower Project, will host the exhibit June 3 to 29, with an opening reception taking place on June 3 from 6 to 8 p.m.

The exhibit is curated by Winnipeg visual artist Kerri Parnell, in partnership with the Canadian First World War Internment Recognition Fund (CFWWIRF) and includes a series of artworks by Parnell that depict the internment of Ukrainian and Eastern Europeans.

The exhibit is laid out in five different sections: War Posters, Light Installation, Emotional Interpretation Series, Old Eyes Series and To Hell with The Alien Enemy.

The aim is to inform the public of the national security fears and wartime prejudices which led to the internment of 8,579 people, among them women and children, identified as “enemy aliens”.

Pause in Plight began to take shape in 2016 when Parnell was living in Cherryville.

The town’s historical society approached Parnell to paint a sign to commemorate the Monashee Mountain Internment Camp site, where prisoners were held during the First World War.

“What I realized with the research of this topic is that people that were interned 100 years ago were affected, but it still reverberates through generations,” said Parnell.

“I think the biggest thing that fascinates me is that there’s so many people that don’t know about it, and that we’re not taught about it in schools. It’s heartbreaking to know they really existed, and they really did suffer.”