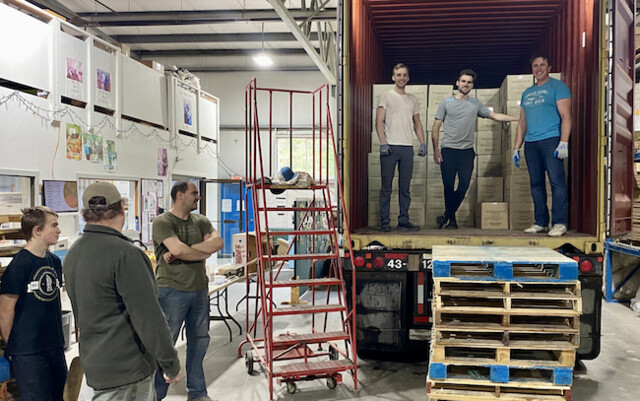 More supplies from the North Okanagan Valley Gleaners are heading to Ukraine.

Hundreds of volunteers throughout the Thompson Okanagan were busy cutting and drying vegetables to make a dehydrated soup mix to be shipped overseas.

“The vegetables have been donated to us from across Canada,” said Brad Egerton with the Gleaners.

Egerton said Missions Without Borders from Abbotsford requested a 40-ft sea can of soup mix which arrived with only 16 hours of notice.

“The GFC Church of Vernon, whom are German and Slavic background, stepped up and sent a group of men to help load the shipment,” Egerton said.

The shipment is on its way to port in Vancouver before being shipped to the Netherlands where it will be rerouted to Poland to help feed Ukrainian refugees in need.

“It was a couple of hours of hard work that will be well appreciated once the soup mix makes makes it to its destination,” Egerton said.

“We were able to put in 1.4 million meals of soup and protein into the sea can and we still had enough room to squeeze in 90 boxes of clothing that people have been working on knitting over the last several months.”

The sea can is the fourth shipment the Gleaners have made to Ukraine in the last six months.

That is over and above shipments that have been sent out to other areas around the world that are also in need.

Next week, the Gleaners will be loading a sea can of medical equipment to ship overseas.