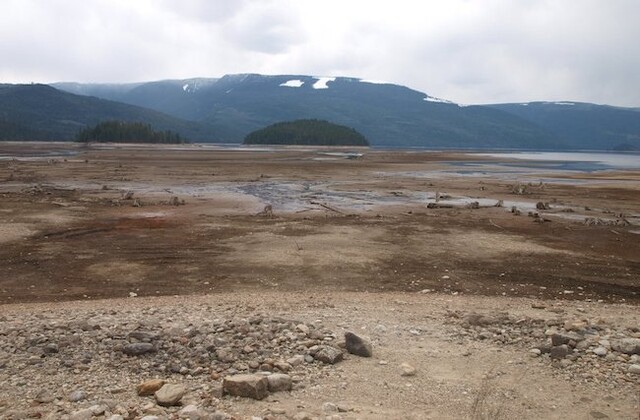 The level of Sugar Lake, north of Cherryville, is unusually low.

Susie Heal Catt posted photos of the lake last weekend showing the lake bed exposed all the way to the islands in the middle.

"Never saw it like this, have you?" she asked in the Around the Block Lumby Facebook group.

The post prompted dozens of responses, with some saying they have never seen the lake this low and others commenting that it is an annual occurrence.

While the images may seem shocking, BC Hydro which manages the reservoir via the Sugar Lake dam, says there is no cause for concern.

"In order to make room for the large volume of water that flows into Sugar Lake reservoir during freshet, the reservoir is typically drafted (lowered) prior to freshet," says Hydro spokesperson Mary Anne Coules.

The reservoir is currently at its minimum level for the year, but well within its observed historical range for the time of year, she adds.

"Freshet flows are expected to pick up as temperatures increase later this month and the reservoir will start to rise. The freshet this year has been delayed significantly by the unusually cool spring, and the reservoir’s refill is starting later than usual this year as a result."

Flows below the Wilsey and Sugar Lake dams will also start to increase as the reservoir rises once snowmelt begins.

There is no connection to the future decommissioning of the Wilsey dam, which is midway between Sugar and Mabel lakes on the Shuswap River and does not control Sugar Lake levels.

The normal maximum level for the reservoir is 601.22 metres, and the normal minimum level is 594.7 metres, says Coules.

"We can operate the reservoir levels between these two elevations as needed to manage the seasonal inflows. In 2018, the reservoir minimum reached was 594.87 metres, but it was reached much earlier in the month, on April 9. For the lake to be this low this late in the spring is unusual and is due to the delayed freshet. The minimum level this year was around 595.02 metres on April 25.

"Once freshet starts, the lake will fill very quickly ... we expect inflows to pick up significantly in another two weeks or so," says Coules.

Meanwhile, the Wilsey dam and Shuswap Falls powerhouse will be decommissioned to allow salmon access to historical spawning habitat in the Shuswap River.

The facility was built in 1929 and represents less than 0.1 per cent of BC Hydro’s total hydroelectric generating capacity.

BC Hydro expects planning for decommissioning and preparation of regulatory applications to be completed within the next 12 to 18 months.